A Comparison Between | Teen Ink

The writer of "The Letter 'A'", Christy Brown, was born with cerebral palsy which meant that he could not control his speech or his movement apart from his left foot. In this account, he describes the moment when his mother realised what he could achieve. In "Young and Dyslexic", Benjamin Zephaniah describes his experience of dyslexia.

Both writers uses listing to present an idea of overcoming difficulties. In text 1, the writer describes his experience trying to list continuously verbs such as “stiffened” his body, “put out” his foot, “shook, sweated, and strained every muscle”, and eventually “drew it”. The listing of verbs presents a vivid image of how the writer tries to write with the chalks to create a sense of breathlessness, allowing readers to feel the writer’s exhaustion due to these actions. This shows how a simple movement of lifting a foot was very difficult for the writer, as well as how he tried so hard to write the letter “A”, which is an important achievement for him. Whereas in text 2, the writer lists his achievements as he overcame dyslexia, including “poetry, novels for teenagers, plays, other books and recorded music”. This emphasizes the amount and vast range of achievements the writer has accomplished despite his dyslexic condition. Writing and reading are much more difficult for the writer because of dyslexia. Listing so many accomplishments in different areas shows the readers that dyslexic people could overcome disadvantages and turn them into advantages, and perform just like normal people or even better.

Both texts use metaphors to create a theme of isolation and abandonment in the writers’ experiences as they were troubled by their bodies’ disabilities. In text 2, the writer describes that he was “lonely, imprisoned” in his own world “as though a glass wall stood between” him and the others. The use of metaphor creates a vivid image for the reader as he compares his difficulty of communicating with others as “a glass wall”, which is strong and unbreakable from his weak voice. Though he can see other people, he cannot touch, speak, or join in their activities, so the readers are able to better understand his feelings of isolation. Whereas in text 1, the writer describes himself to be “thrown out by a lot of schools”. This is comparing himself to rubbish which would be disliked and get “thrown out”. This creates an image for readers that he was not welcomed by schools and the society and was treated like trash, which was supposed to be thrown away and disappear, giving the sense that he did not belong to the same world as normal kids due to his dyslexia. He was abandoned by the world, presenting a theme of isolation and abandonment like in text 2.

First-person perspective is used in both texts to tell the writers’ experiences. In text 1, the writer says that “I drew it” after his mother showed him how to write letter “A” with a chalk. The use of first-person perspective gives immediacy to the text by allowing the writer to create direct emotional connections with the readers. The personal pronoun “I” shortens the distance between the writer and readers so that his emotional shock from happiness and successes could be easily felt by readers. This is used similarly in text 2, as the writer says, “I never thought I was stupid” and “us dyslexic people, we’ve got it going on”. This short simple sentence is a declarative statement which shows the writer’s affirmative attitude. It emphasizes the writer’s confidence about himself. This emotion is successfully transferred to the reader through the use of first-person pronouns, by letting the readers feel like having a direct conversation with the writer with no distance. However, there’s more use of the collective pronoun “us” and “we” in the text 2. This shows difference in purpose of the two texts, as the text 2 is an article with targeted audiences, especially the dyslexic population, so it’s more frequently addressing the audience and persuading them, encouraging them to be confident. Whereas text 1 is just telling the writer’s story, therefore focusing on himself and mostly using “I” as pronoun.

The two texts both use declarative statements to show a positive attitude against difficulties, through different tones, which is excited in text 1 while more confident and defiant in text 2. In text 1, the writer successful wrote a letter “A” with his left foot and said, “I had done it!” This declarative statement directly transfers the narrator’s emotions to the readers, which makes readers easier to understand. An excited tone is used due to the use of exclamation mark. It shows strong emotions of happiness and excitement after the writer found a way to communicate with others and shows his new possibilities for future. Similarly, in text 2, the writer says that “if someone can’t understand dyslexia, it’s their problem”. This also uses declarative statement to directly transfer the writer’s strong confidence and affirmative attitude to the readers, which shocks them and leaves them a deep impression. The writer uses a defiant tone in his statement to emphasize that dyslexic people should not be blamed for their difficulties and advantages. Those who lack understanding of this group should be blamed, instead. 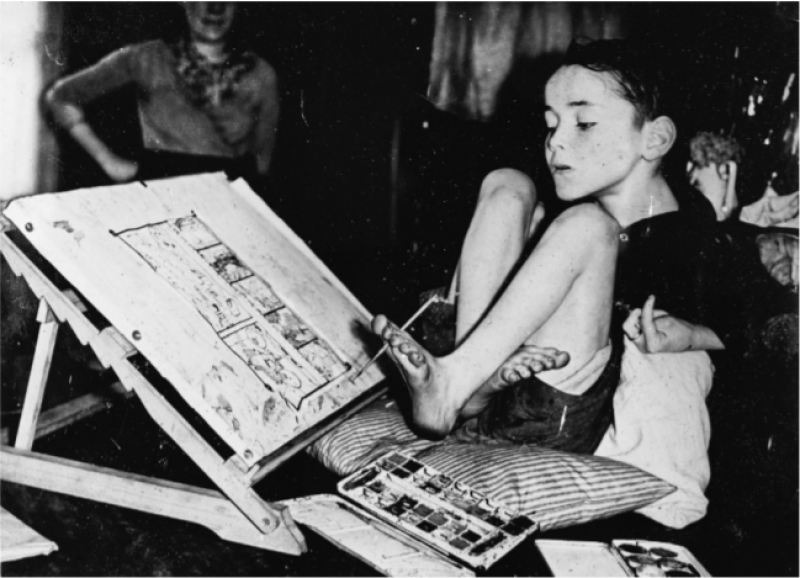