David Halberstam is an award-winning novelist and journalist who wrote for the New York Times. Known for sports stories, in The Teammates he writes about the friendship of Dominic DiMaggio (Joe DiMaggio's brother), Ted Williams, Bobby Doerr, and Johnny Pesky.

Williams, the legendary Boston Red Sox slugger and Hall of Famer (who remains the last .400 batter), is dying in Florida and DiMaggio, in his 80's, decides to drive from Massachusetts to see his friend one last time. Dick Flavin and Johnny Pesky travel with him. Bobby Doerr can't join them because his wife has suffered a stroke.

As they travel the 1,300 miles, Halberstam flashes back to the period when these four teammates played baseball together. He writes about when Doerr and Williams went fishing, the 1949 Yankee-Red Sox pennant race, and more. This book is about four Red Sox teammates who stayed close for nearly 60 years.

I liked Halberstam's writing style and use of flashbacks. I recommend this book to baseball fans, especially Red Sox fans. 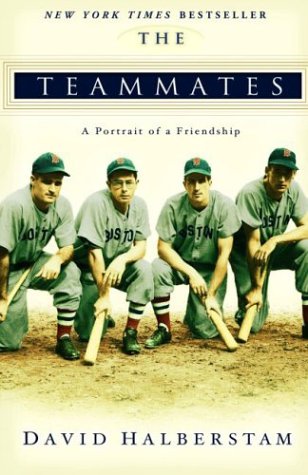