Waiting for Snow in Havana MAG

The world changed while I slept, and muchto my surprise, no one had consulted me. That's how it wouldalways be from that day forward. Of course, that's the way it hadbeen all along. I just didn't know it until that morning. Surpriseupon surprise: some good, some evil, most somewhere in between. Andalways without my consent.”
- CarlosEire

Carlos Eire's memoir Waiting for Snow in Havana:Confessions of a Cuban Boy is filled with messages of hope. Eire grew upin a wealthy Havana suburb. He was a privileged child who huntedlizards, played with firecrackers and even ran through one of hisneighbor's private backyard zoos. Even the monks at his schooltell him that Cuba is a paradise. But Eire must search for anotherparadise when Fidel Castro's regime forces him (along with 14,000other children) to be sent to the United States by his parents when heis just 11 years old. This would turn out to be a permanentexile.

Now a professor at Yale University with a Ph.D. intheology, here he looks back to share his stories about moving aroundthe United States with different foster parents and eventually reunitingwith his mother. He never sees his father again after leavingCuba.

Eire did not write this as a typical autobiography sinceevery chapter explores a theme of life, some deeper than others. He, forexample, learns the simple concept of never swimming after eating, butalso sees a deeper meaning, which is never to give up and always keepyour hope and faith.

Waiting for Snow in Havana had quite animpact on me. To begin with, I am the type of person who enjoys readingabout ideas that deal with life because my life has not been entirelyeasy. Going to three high schools with many moves, this book showed methe power of hope and persistence. It seems that everything turns outall right for Carlos Eire and that he has found his new paradise, somaybe I can, too. 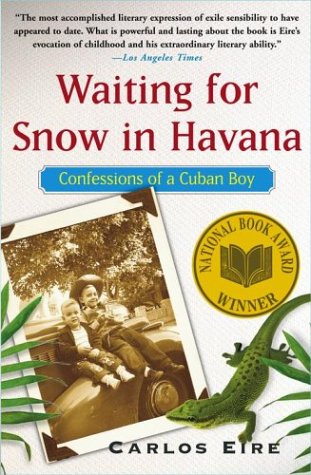