Lies My Teacher Told Me MAG

Lies My Teacher Told Me: Everything Your American History Textbook Got Wrong is a shocking and fascinating collection of lies about United States history that have been perpetuated by textbooks. For example, we are all familiar with the fact that Christopher Columbus did not really discover America, but this book goes over every piece of evidence to prove that many peoples knew about America for centuries before Columbus.

Lies also reveals details about Americans who have been “hero-ified” by American textbooks who are never included in these textbooks. For instance, you rarely (if ever) hear about Helen Keller's later life because she became a socialist leader and supporter of the Soviet Union. To disclose this in a textbook would be to admit that America and its brand of Capitalism is not necessarily infallible, and should be avoided at all costs.

Lies My Teacher Told Me is a descriptive, fascinating and refreshing read. By putting continuous nationalism ahead of our education, we as citizens of a democracy run the risk of losing this democracy itself. If we have learned anything from 1984, it's that when the population is uninformed about its own history, the government has a free pass to make up the version that is most beneficial for those in power. 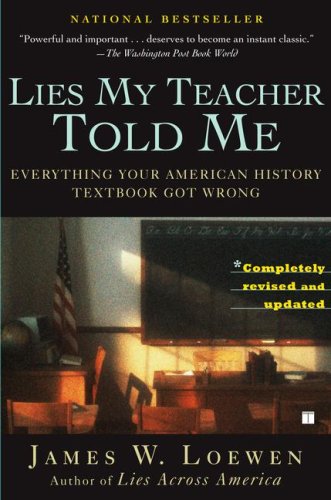 Favorite Quote:
He who is bound to a star does not turn back.
Leonardo Di Vinci

You see I'm a bit of a poet, and you did not know it! What!?
~Sir Percy Blakeney

View profile
Sounds like a really cool book! Your review was great!