The captivating Absolutely American by David Lipskygives an inside view of what it is like to be a cadet at the United StatesMilitary Academy.

As a reporter for Rolling Stone magazine, Lipskyreceived permission from West Point to live with the cadets and learn firsthandwhat they experience. The Academy hoped this book would help readers understandthat West Point not only gives its students an excellent education, but also asense of loyalty, honor and character not usually attained in college. AbsolutelyAmerican appeals to a wide range of readers.

Following one company forfour years, David Lipsky reports how the cadets fare. He exposes the lives ofmany, including George Rash, a group of four cadets (nicknamed the Goodfellas)and Cadet Chrissi Cicerelle. He shows the hardship Cadet Rash endures as hestruggles to pass his physical aptitude test. Lipsky digs deep into the corevalues of the Goodfellas, who come from all parts of the country and borrowedtheir nickname after watching the movie.

Lipsky also unearths the deepfeelings of Cadet Cicerelle, nicknamed Ms. Priss and Princess, as she struggleswith her need to look and feel feminine while maintaining the Academy's strictrequirements.

Duty, Honor, Country is the Academy's pledge, which isimplanted in the hearts of cadets. David Lipsky captures the true feelings andhardships they must endure in order to honor this pledge, and to graduate. Noother reporter has been allowed to experience such an extensive stay at WestPoint. The result is a captivating, must-read book. 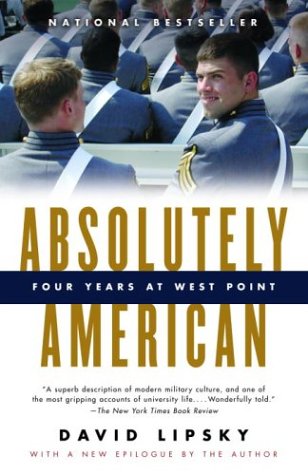