Lies and the Lying Liars Who Tell Them | Teen Ink

Lies and the Lying Liars Who Tell Them MAG

Sometimes the people on television don't tell thewhole truth, and sometimes they just plain lie. I had never thought about thisuntil I read Al Franken's Lies and the Lying Liars Who Tell Them - A Fair andBalanced Look at the Right. This book is full of humor and is very wellresearched. It was obviously written by a liberal and contains some PG-13material.

Franken is very blunt in his beliefs, but is able to back upalmost everything he says. He looks at what a variety of politicians andnewspeople have said on TV and, along with a team of Harvard graduates,researches the accuracy of their statements.

The best thing about thisbook is how the chapters are divided, which makes it understandable even withoutreading straight through. This also allows you to skip around and read whatsounds most interesting. Franken's writing and descriptions of people make youwant to check up on his research by doing a little of your own. If you'reinterested in politics, this is a great book. 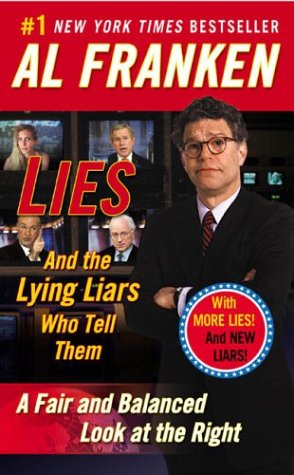