The Grapes of Wrath | Teen Ink

The Grapes of Wrath MAG

TheGrapes of Wrath, a depiction of man's struggle against injustice and inhumanity,is considered Steinbeck's masterpiece.

The novel begins with a vividdescription of summer in Oklahoma, one of the states where crops were destroyedby the Dust Bowl. The bank that owns the land the families have lived and workedon so long is pulling out, in some cases actually destroying their homes.

What should they do? Where should they go? The answer for many, includingthe displaced Joad family, seems to be California, where supposedly there arelots of jobs for farmers.

The Joads suffer immensely getting toCalifornia, and once there, their dreams and hopes for a better life are dashedby a horrible reality.

Steinbeck uses his novel to expose the courage,determination and unity of people who want to survive. The characters speak asthey did in that time, but it is not hard to understand. Steinbeck's style is sorich in language and description that the reader wants to keep going.

TheGrapes of Wrath is a great book for those who like an extremely descriptive andinteresting story with figurative language. It will surprise you with itsrichness. 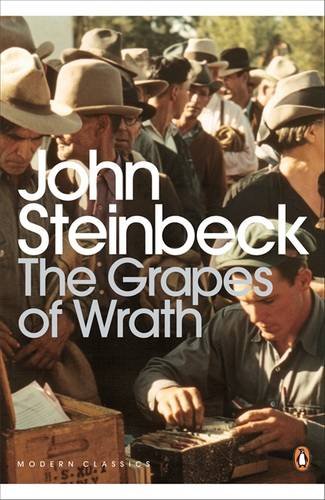