The Devil in the White City | Teen Ink

The Devil in the White City

The Devil in the White City Review

Erik Larson's nonfiction book The Devil in the White City takes place in Chicago in 1893. It mostly takes place on the site of the fair and on Sixty-third Street. Larson describes in his book that drinking water is polluted from all the factory waste. When they try to fix the problem the citizens revolt. Larson describes this so well can anyone who reads this book can just see the crowd and all this polluted water in their lake. At the beginning when Chicago is waiting for the fair Larson describes the crowd waiting for the result. It feels like he puts the reader right there with the crowd just waiting.

One of the main characters is Henry Howard Holmes. He is charming to many women. This is because no man would ever do the things he does in public, and that is what these women love most about him. Luring women into his heart until they go crazy if they are not near him. He is also very twisted and is very sneaky about his crooked ways. He built a sound proof room in his hotel, and he built a kiln that was more like a crematory. Another main character was Daniel Burnham. Burnham was kind of impatient. Always riding his workers about how they weren't working fast enough and they needed to work faster and harder. Larson made it so that readers can see he was determined. This is because Burnham wanted more than anything to build a tower that would make the Eiffel Tower look like a toy.

In The Devil in the White City Daniel Burnham, a hard working architect combines with Root, a lazy architect, to build the greatest World Fair ever. Their dream is to make it great while another man's dream was to use it to lure helpless victims to their doom. Holmes, a very crooked man, is determined to follow in the steps of the famous serial killer Jack the Ripper. As the fair nears Holmes dreams could possibly come true. After an unexpected slow down Burnham finds he might have bit off more than he can chew.

My only problem with this book is in the beginning there is a lot of history so it is a little boring. Other than that the book was great. The book is thrilling and mysterious with a bit of history. If you don't mind the history than I recommend this book to anyone. I don't usually like murder books but reading about this and knowing that it really happened excited me, and I got really into it. I strongly think everyone should read this. 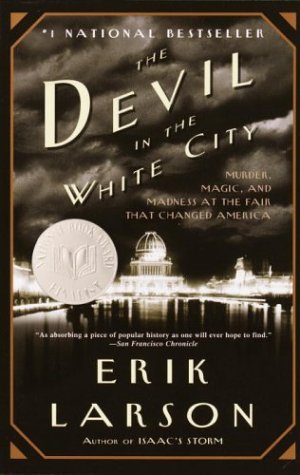