There have been many moving books written on the subject of feminism and women's rights, but “A Thousand Splendid Suns” shatters the competition. It is a tale of triumph, despair, joy, and other tear-jerking emotions, all set to a backdrop of Taliban-era Afghanistan.

The book has two main characters: Miriam and Laila. Miriam is a generation older than Laila, and is a scarred, illegitimate daughter of a wealthy businessman. Laila, on the other hand, grew up in a peaceful neighborhood, and is a smart and cheerful girl, her life turned around when her parents die in a rocket explosion. What brings these two together? As fate would have it, they are the wives of a brutal matriarch, Rasheed, who is old enough to be Laila's grandfather. They are brought together, with totally different backgrounds, and become friends, pitted against the antagonistic Rasheed, in the backdrop of the never-ending war in Afghanistan and the harsh religious laws putting the women at a severe disadvantage against the men.

“A Thousand Splendid Suns” is, honestly, one of the most profound books I have ever read. There is just something about the way it is written, the subject matter, how the author approaches it that has an emotionally powerful air to it. Mr. Hosseini does an extremely good job of balancing his book with heartbreaking sadness and social injustice, but also adding a sprinkling of hope and ecstatic moments, mutually accentuating the emotional intensity. Books on feminism can go either two ways: they can be stereotypical, boring, and predictable, or they can be fresh and unpredictable. This book is the latter.

One of the ways that “A Thousand Splendid Suns” keeps you on your toes is with its cliffhangers at the end of chapters. Sometimes it's because of an unexpected event that happens, but sometimes it might just be the very nature of the book. Even though the next thing you read about in this book probably won't be pretty, something still makes you read on.

I also enjoyed the layout and order of the book. In the beginning, many chapters in a row were titled with either “Miriam” or “Laila,” as the characters were still being introduced. Interestingly enough, the chapter layout takes a spin later in the book, as they start alternating with Laila and Miriam. The author juggles the tasks of moving the story along with emotional significance, while also alternating the focus on the two main characters, which I find is pretty amazing. The story was not only ordered in chapters, but was also divided into four parts. Part One and Two were focused on separately developing Miriam and Laila. Part Three is when they meet, and is focused on their relationship with each other living together, and Part Four is a conclusion to the story.

The one thing about this book I didn't like too well was its development. The author spent a lot of time in Part One and Two of the Book, but didn't go a lot into the relationship between Laila and Miriam, which I thought was the most interesting part of the book. I would've personally liked it if Part One and Two were merely intros and shorter than Part Three.

Even though “A Thousand Splendid Suns” does have slips, the goods outweigh the bads. I recommend it to anyone who to wants to read a gut-wrenching story about social injustice and living in wartime. As for me, I definitely plan to read Khaled Hosseini's other bestseller, The Kite Runner. 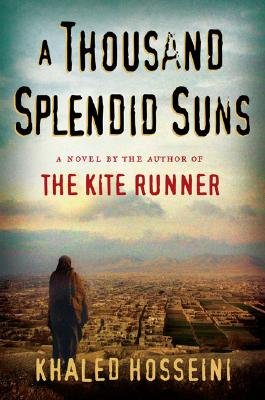