I am not used to writing short stories. I must always go into detail about every tiny unit of science, fiction, science fiction, or well… everything. Maybe that's why my mom and dad made me read a book of short stories in the first place. The book was called "Guys Write For Guys Read." Which I think is some website for teenage guys to go on and find work by their favorite authors who were also once guys. The book was small, but probably had 300 pages if round to the nearest hundred, and was almost entirely filled with (not including publishing inormation and ™ stuff) biographical short stories written by famous authors, all of whom were once guys. You know, like Stephen King and Jon Sciezka and some other guys. At first I wasn't particularly excited about my new reading book, but after the first day, I found myself not only reading it during school time, but also at night as well. I mean, there's just something appealing about realizing that successful, wealthy authors with a private limousine and a beach house in Florida with armed soldiers protecting them day and night against anyone who dosn't like their work, were actually like you once. You know, without Xbox and Playstation. Well, I told you that I have to go into detail about everything. Look, it's 2:30 already and you're sitting at the computer and reading the monologue of a random nerd who doesn't know when to shut up! But before you send a nuclear strike on my house for boring you to death, let me say this: "Guys Write For Guys Read" is a great book for anyone who is looking for the humor, drama, excitement, and unfairness in teenage life without actualy experiencing it first hand. At least not yet that is. 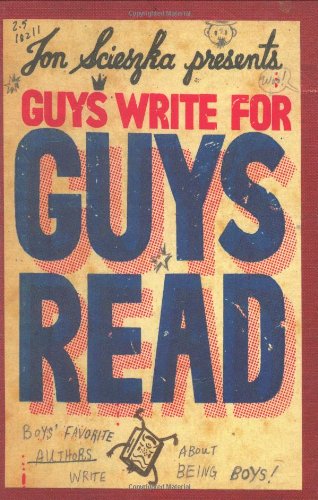 
Buy from Amazon
The author's comments:
THE NUCLEAR NERD


NOW LIVES: IN A SMALL TOWN SURROUNDED BY MOUNTAINS WITH HIS IDENTICAL TWIN BROTHER AND CAT.

RANDOM FACT: HAS A SCAR ON HIS FOREHEAD FROM WHEN HE CRACKED IT OPEN WHILE HIKING.

KING ARTHUR AND THE SWORD OF FIRE


A CRIMINAL AFFAIR: WITH COPYRIGHTED CHARACTERS, COPYRIGHTED BY SOMEONE ELSE AND IS PROBABLY NEVER GOING TO BE PUBLISHED ON TEENINK BECAUSE OF LEGAL REASONS.
Post a comment
Submit your own

View profile
Thanks for the comments.