The Chronicles of Narnia: The Horse and His Boy by C.S Lewis | Teen Ink

The Chronicles of Narnia: The Horse and His Boy by C.S Lewis

Shasta had never felt at place at his home in Calormene with his fisherman father. He had always had a strange fascination with and felt a calling to the far North. When he meets a strange Talking Horse named Breehy-hinny-brinny-hoohy-hah (“Bree” for short), he finally gets his chance to travel to that strange country to the North, where there are rumored Talking Beasts and a demon Lion.

C.S Lewis enthusiasts label The Horse and His Boy (published fifth in the Chronicles of Narnia series) as third chronologically, but I find no basis for this order, after reading the story. The Horse and His Boy is one story that (it seems) can be read anytime after finishing The Lion, the Witch and the Wardrobe with perfect understanding of what has/is happening.

In fact, if you want to read the series chronologically, before finishing The Lion, the Witch and the Wardrobe, stop sometime in the middle of the chapter “The Hunting of the White Stag”, read The Horse and His Boy and then go finish The Lion, the Witch and the Wardrobe, since chronologically this story takes place while High King Peter, Queen Susan, King Edmund and Queen Lucy are ruling during the Golden Age of Narnia, before returning to War Drobe in the land of Spare Oom in the Professor’s house.

As I write this, I’m in the middle of reading Prince Caspian (the fourth book chronologically). Out of the four stories I have read so far, The Horse and His Boy is probably my least favorite. Not because it isn’t a good story (it is, really) but mainly due to the fact that the story takes place outside of Narnia for the majority of the story. The feel of the story is that of (or at least similar to) The Black Stallion, The Prince of Persia and Hub’s story in Secondhand Lions; the descriptions of Calormen make you think immediately of the Middle East with their palaces and turbans and large gated cities.

Even with Talking Horses and appearances by King Edmund, Queen Susan and Queen Lucy, and of course Aslan, the story still feels as though it doesn't belong in The Chronicles of Narnia, until chapter twelve when Shasta, Aravis and the horses finally make it to Narnia. This is not to say that The Horse and His Boy is a bad, boring or just crummy story. In fact, for any fans of Walter Farley or Marguerite Henry, this story would be a hit; but reading it alongside The Lion, the Witch and the Wardrobe or The Silver Chair, it simply may feel out of place, since it doesn't take place in Narnia, but in traveling to Narnia. And it's only once they reach Narnia that the action really begins. Battles and Talking Beasts and mysteries lead up to a humorous and surprising and heart-warming end to this childhood classic. 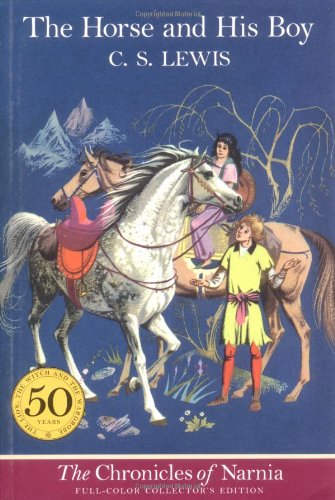 
Buy from Amazon
The author's comments:
I wrote this a while ago. So, if someone thinks that it's off a little since I already posted a review of The Last Battle, I just wanted to explain that this was written when I was reading Prince Caspian.
Post a comment
Submit your own

I actually own The Screwtape Letters, but I haven't read it yet.

Yeah, I love this story, I really do and it's kind of interesting to see what went on during the Golden Age, but the whole chronology does not really seem to apply or need to apply when reading the Narnia books.

Favorite Quote:
"The manner in which we live and that in which we ought to live are things so wide asunder that he who quits the one to betake himself in the other is more likely to destroy than to save himself." ~Niccolo Machiavelli

So let us find the balance.

I am a big fan of C.S. Lewis. I am currently reading his book, The Screwtape Letters (if you haven't read it already I recommend it) I read all the Chronicles of Narnia books 6 years ago, and I barely remember this story, but I do remember also being confused by the chronology. I figure it must have just been a side thought after starting the series, Lewis probably wanted to prove a point, and found that using previous character developement was easiest.

Beautifully written by the way. :)