First Published in 1953, Arthur C. Clarke's "Childhood's End" is the story of human-kind's encounter with a powerful race of aliens, known as the "Overlords." The Overlords, though frightening and secretive, seem to have only the best intentions for humanity, and within fifty years, create a utopia. But there may be more to this extra-terrestrial visit than meets the eye. It will take the different stories of several humans throughout the span of 150 years to find out what these intentions are. Childhood's end, as suggested by the title, is the story of how humanity leaves it's nursery and discovers more about themselves, the universe they live in, and the role they will (or won't) ultimately play in it's future.

The Story follows no particular protagonist at a time, instead focusing on the grander scheme of things. The characters that do appear in it however, are all memorable in there own way. The German scientist, Stormgren, the first man to speak directly to the Overlords representative, Karellen. The normal father George, who, along with his wife Jean must learn to cope with a harsher reality. And Jan, the man who goes farther than any other man.

As previously stated, "Childhood's End" was first published in 1953, and is re-printed all the time. It is one of many novels written by Arthur C. Clarke, who is probably best known for writing 2001: A Space Odyssey. Absolutely cutting-edge for a book of it's time, (as is proper for a book written by a scientist.) Childhood's End, has given influence to many creators of fiction and art, including Led Zeppelin, and Hideaki Anno, the creator of the classic anime series "Neon Genesis Evangelion." He used imagery inspired by the novel in his animated feature film "The End of Evangelion." 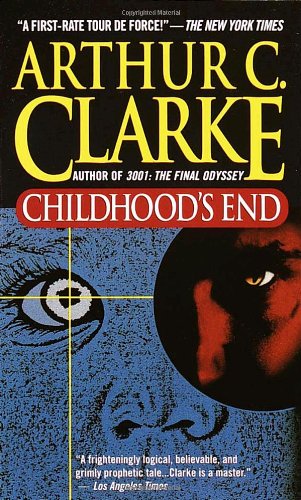 
Buy from Amazon
The author's comments:
"Childhood's End" is a true science fiction classic, which should not be overlooked by any true sic-fi fan.?
Post a comment
Submit your own