The legacy of Catherine Earnshaw and her love, Heathcliff, has always been a rare one. Unlike other novels written by the women of her time, Emily Bronte's Wuthering Heights is no ordinary love story. Catherine and Heathcliff are no Romeo and Juliet, or Elizabeth and Darcy. Instead of being infatuated with one another, they are, in fact, downright cruel to each other. At one point, Catherine tells Heathcliff, “‘You might be dumb, or a baby, for anything you say to amuse me, or for anything you do, either (87)!'” Their relationship is one of constant feuding; even after Catherine's death, Heathcliff is intent on exacting revenge for her vindictive actions. Wuthering Heights is, in fact, more accurately described as a hate story, rather than a tale of love.

Part of what makes this story so interesting is the fact that Catherine and Heathcliff have almost no redeeming qualities, if not none at all. Cathy is a selfish snob and Heathcliff is just downright evil. Most of the characters synonymous with love, such as Elizabeth Bennet and Mr. Darcy, have at least one positive trait to connect them to the reader. Catherine and Heathcliff, however, have absolutely atrocious personalities. Cathy gives him much pain for not being wealthy and well bred, and even though it hurts Heathcliff, she marries Edgar Linton, the young man who has been courting her. Catherine tells her friend and housekeeper, Ellen Dean, who actually tells the story, “‘It would degrade me to marry Heathcliff now (100).'” All of Catherine's selfish cruelty almost makes one want to feel sorry for Heathcliff, but there's absolutely nothing redeeming about him. Even after Cathy is married, Heathcliff comes and ruins things, running away with Edgar's innocent sister and, according to Mrs. Dean, causing Catherine to become ill and die. Heathcliff eventually forces Cathy's daughter, who is also named Catherine, to marry his sickly son, whose name is Linton. This marriage is exactly what Edgar, Catherine's father, does not want, and Heathcliff knows this. Linton is at his father's beck and call, and Catherine's life at her mother's first home, Wuthering Heights, turns out to be a cruel one. Even after Linton's death, shortly after their marriage, Heathcliff continues to treat Catherine maliciously, as if somehow this will help him avenge her mother's ill treatment of him. In response to this, Catherine becomes a vicious thing, going so far as to completely belittle Hareton Earnshaw, her cousin and the only person at Wuthering Heights who tries to show her any kindness. Eventually though, Catherine and Hareton fall in love, and after Heathcliff's death a year later, they decide to marry and move to Thrushcross Grange, Catherine's childhood home.

Every relationship is this novel is filled with angst, anger, some hatred, and even though there was some amount of love in each, there was not so much as in the relationship between Catherine and Heathcliff. Although the idea of them being in love seems crazy and impossible, it is true. Most of the time, it seems that they hate each other with a passion, and their actions, not just to each other but to their families as well, would prove this. However, both Catherine and Heathcliff say something to Mrs. Dean that shows that beneath the hatred is a deep, somewhat twisted, love. Before marrying Edgar Linton, Catherine says, “‘If all else perished, and he remained, I should still continue to be, and if all else remained, and he were annihilated, the universe would turn to a mighty stranger: I should not seem a part of it…Nelly, I am Heathcliff (102)!'” After fighting with Edgar and apparently causing Catherine's illness, Heathcliff says, “‘And there you see the distinction between our feelings: had he been in my place, and I in his, though I hated him with a hatred that turned my life to gall, I never would have raised a hand against him…I never would have banished him from her society as long as she desired his (184).'” Their love is never obvious, even to each other, and the actions that pull them apart are what make this novel so different from any other love story. In the end, the only good thing about Catherine and Heathcliff is their love, as unapparent as it may be. Even though they seemingly ruin the lives of those around them, maybe it is this unprecedented couple that brings the younger Catherine and Hareton together. At the conclusion of the novel, Mrs. Dean remarks, “‘I believe the dead are at peace (414),” as if to say that, finally, Catherine and Heathcliff are together. 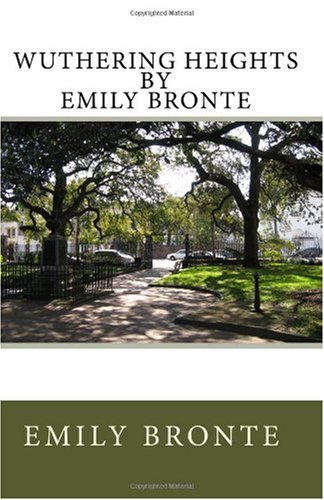 Favorite Quote:
Tomorrow is another day,

View profile
Brilliant! I love it soooooo much! Please keep writing!
E-su said...
on Mar. 11 2011 at 1:23 pm
Beautifully written. Such a good review for such a good book. Wuthering Heights is one of the best books ever written. Well done :)