Perfume: The Story of a Murderer by Patrick Sueskind | Teen Ink

Perfume: The Story of a Murderer by Patrick Sueskind

“In eighteenth-century France there lived a man who was one of the most gifted and abominable personages in an era that knew no lack of gifted and abominable personages.” So begins the book Perfume: The Story of a Murderer by Patrick Sueskind. I’ve been to Paris once. Not in the eighteenth century of course, and I can’t say I ever met any “gifted and abominable personages”, well, not outside of this book that is. Patrick Sueskind made me go back to Paris, travel into the eighteenth century, and meet this abominable person. Sueskind doesn’t just tell the story of the murders and the murderer, he tells the story of life. Of everyone’s life. Without giving too much away, let me just say that Patrick Sueskind takes the life of an obviously deranged man and relates it to the lives of ordinary citizens. Every human being is looking for something out there in that wide world, whether it be a decent pay check or the love of your life, and, occasionally, there is that one person who will go to no ends to get whatever it is.
The story of this abominable person is one of terror, passion, murder, and scents. Jean-Baptiste Grenouille, born with an incomparable sense of smell, abandoned at his birth and shunned by all because he has no scent of his own. Growing up not knowing human kindness he lives only for the odours of Paris and to recreate one in particular. His fascination with scents leads him to becoming an apprentice to a master perfumer, and he quickly learns all there is to know about the art of mixing perfumes. One day he detects the faint scent of something so beautiful he becomes obsessed with finding the source of it only to learn that it comes from a girl on the brink of womanhood. When he smells this scent of scents he must capture it and it is this poor girl that starts the incredible story of Jean-Baptiste Greounille and his obsession with finding the perfect perfume which takes him on a journey and wherever he goes he leaves death and misery in his wake.
Now don’t worry, this isn’t one of those boring philosophical books. There can be some pretty lengthy descriptive parts and Jean-Baptiste Grenouille has practically no dialogue, but you have to understand that this is a seriously depressed and socially awkward man. Actually, I wouldn’t say he was depressed as much as confused. The book is truly, one of the most well written books I have ever read. The dialogue of course fits that of eighteenth-century France but it is so rich and understandable that anyone can easily follow it. The book was so well narrated that I could almost smell all the scents that Grenuille. So relax and go check it out, Perfume: The Story of a Murder is a gripping tale of obsession and destruction. 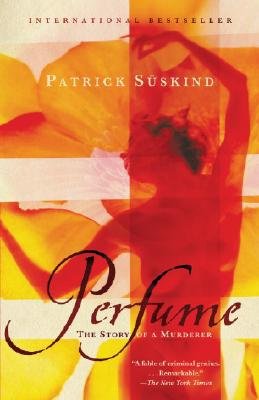