The true Regency era of England only lasted nine years, beginning when the Prince of Wales became the regent (1811) and ending when he was proclaimed King of England (1820), however the name of ‘Regency’ is often used to describe the dates between 1780 and 1830. This time was greatly influenced, both socially and culturally, by the man who became George IV of England. The Regency era was a time of extraordinary achievement in art and literature. The work of artists, Joseph Turner and Thomas Lawrence, to name a couple, as well as the novels and poems of writers such as Jane Austen, Lord Byron, and William Wordsworth still stand as exemplification of the romance, color, and vitality of the age. The Regency era of England and the universal stories of Jane Austen inspired many writers in later dates though none were as successful, talented, or historically accurate as the British author Georgette Heyer.

Georgette Heyer was born in 1902 and was, basically, the founder of the ‘Regency Romance’ genre. Previous to Heyer the only literature about the time period was written by people who experienced it firsthand. Georgette Heyer was the first author to research the topic and write about it from a different perspective. Heyer is famous for her thorough research and extremely detailed description of everyday life. Her characters are known to be well developed and she has been adored by readers since she first picked up a pen at the tender age of nineteen. To emphasize, she wrote her first novel when she was just a year older than highschool graduates and was immediately a huge success.

Arabella is the story of Arabella Tallant, the eldest daughter of an impoverished country vicar, and her first season in London. The question of having a London season had always been a tender one with Arabella’s parents but when she was offered to spend the season with her godmother; her parents were not foolish enough to refuse. Arabella’s trip is more than she expected even before she arrives in London. On her journey to the capital Miss Tallant’s carriage breaks down just outside the gates of Robert Beamaris’s home and she has to rely on his hospitality until her carriage has returned to its original state. After overhearing the snobbery of Mr. Beamaris she claims she is an heiress. It is all she can do to keep up this picture when she learns that all of London believes she is in possession of a fortune. During her season she is thrown numerous times into the company of none other than Mr. Beamaris and he soon discovers that the simple country girl is more important to him than any other woman of his acquaintance.

Though I had read the works of Georgette Heyer before, this was a completely new kind of book than any I had read previously. Georgette Heyer is so descriptive and historically accurate it felt as though I was sitting with Miss Tallant and Mr. Beamaris in the salons of London and dancing my way across the floor at Almacks, watching the couple float across the floor from afar. The characters are spectacular; Mr. Beamaris, so ridiculously manly, is the perfect hero while Arabella, utterly feminine, was often in desperate need of one such hero.
The ending is predictable for a romance novel but at times the story seems like it may not end with a “happily ever after”, though all the misunderstandings of the characters could sometimes be rather comical. Arabella’s personality was sometimes rather irritating. Even if Arabella is more sensible than the other girls of the Regency, who were almost always fainting and fanning themselves, her strong headedness and independent thought could sometimes come across as pride and stubbornness, though not quite in the Mr. Darcy sense. But that’s a completely different Regency tale and I won’t go into it…yet. 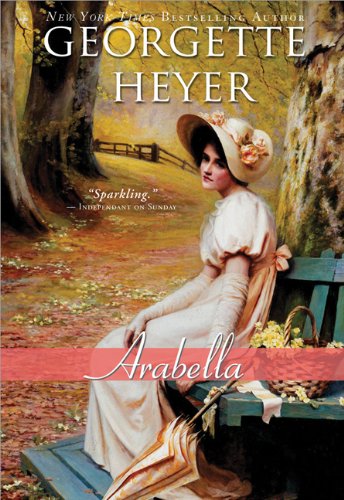