Wicked: The Life and Times of the Wicked Witch of the West by Gregory Maguire | Teen Ink

Wicked: The Life and Times of the Wicked Witch of the West by Gregory Maguire

Favorite Quote:
When I was little they called me a liar, but now I'm grown up, they call me a writer.

Wicked, Gregory Maguire's perceptive and captivating take on The Wizard of Oz, became a modern cult classic (and later a hit broadway musical) when it was published in 1995. In L. Frank Baum's classic tale, we read only of Dorothy's triumph over the Wicked Witch of the West. But what about the Wicked Witch herself? What made her so wicked? Where did she come from? And what is the true nature of evil? Wicked, subtitled "The Life and Times of the Wicked Witch of the West," is an alternative, imaginative, and clever re-creation of the land of Oz before Dorothy and her dog crash-land in Oz.

Through Wicked, Maguire narrates the story of the Wicked Witch of the West, and her life and experiences in Oz — which is not a fairytale place of happiness and joy, but a dark, oppressive police state full of political machinations. It's a land where Animals, who are sentient and have voices, souls and minds, are persecuted and exiled. It's a place where you are wicked if you are different; if you tell the truth.

Gregory Maguire's fantasy world in Wicked is sketched vividly enough to change the way we look at Oz. For starters, the Wicked Witch has a name: Elphaba, and she is not wicked but insecure and unfortunately green. She may be taunted by others, including her mother, with names like "Little Frog" or "Lizard Girl," but she also has an endearing nickname given to her by her friends — Elphie. She has also not formally trained in witchcraft. Maguire's Elphaba is not a person who dreams of inflicting devilish deeds on the world that refuses to accept her. She is a zealous Munchkinlander who fights for tolerance and who's willing to take "steps" to put an end to the tyrannical rule of the Wizard of Oz. Elphaba is smart, and sassy, an intellectual, an activist, a bit of a revolutionary, who is often misunderstood and not accepted and who goes somewhat mad in the end.

Maguire's tale also fills in numerous gaps in Elphaba's story. We come to know about her tumultuous childhood (born with an unfortunate skin condition and parents who find it hard to accept her). We are told of her school days in the Shiz University — the time she meets Glinda, the good witch. Both are forced by circumstances to become roommates and friends, reluctantly. Shiz is also the place where Elphaba becomes a member of a small circle of Oz' most promising young citizens. Maguire also tells us of Elphaba's beliefs and politics — she becomes a part of an underground resistance movement that tries to get the Animals their rights with whatever means possible, even (attempted) assassination. We are told of her religious zealot of a sister — Nessarose, who leads the Munchkinlanders to throw off the rule of Wizard of Oz, and who dies when Dorothy's Kansas house lands on her. And we are told the story of how she loses her one true love. Eventually we also come to know how Elphaba's life spins out of her control. Her ideals and beliefs lead her to be caught up in events larger than herself, of the kind she is incapable of dealing with. Elphaba's nature and actions ultimately challenge our notions about the nature of good and evil.

Dorothy, whom we see only briefly in the prologue, appears properly in the final part of the book. She is a country girl, good, but a bit dull-witted.

But it would be wrong to assume that what Maguire has achieved is merely a clever creation of opposites: Elphaba = misunderstood heroine, Dorothy = villain.

No. Wicked makes real, three dimensional people out of the original characters. They are as complex as the people in the world we live in. Oz, itself, is a not a world clearly marked by the black and the white, but has its shades of gray (or should we say, shades of green).

Oz' politics is as complex and often as ludicrous as it is in our world. The same is true of Oz' religions and belief systems. The religion of the Un-named God, the pleasure-seekers, the followers of the time dragon, education, the different social and political causes — each has its zealous followers who have their own tenets of Right and Wrong, about Good and Evil.

Part of the appeal of Wicked also lies in recognizing elements from the Baum's Oz and (especially) from the movies [I haven't seen the 1939 version of the movie, but I recollect as a kid watching "Return to Oz" — twice]. Madame Morrible's (the politically-connected headmistress of Shiz University) murdering mechanical servant Grommetik is Tik-Tok of Oz. Young Elphaba, disgusted by an experiment on a Lion cub, rescues it. We know this cub is the Cowardly Lion. In Elphaba's rescue of a monkey and her later attempts to breed flying monkeys by stitching wings on them we can see the origin of the flying Monkey units that eventually will carry off Dorothy, Toto and the Lion.

Wicked, however, is no child's tale. It is darker than Baum's Oz. Wicked's tyrannical Wizard rules with the help of his "Gale Force," his storm troopers (who murder Fiyero, the Prince of Vinkus and Elphaba's love). The Wizard's emblem, a balloon and basket with crossed bars beneath it, looks like a skull and crossbones at first glance. He also hints at having performed human sacrifice. Glinda, the good witch's award of the slippers to Dorothy is a calculated move to help the Wizard crush the Munchkinland rebellion started by Nessarose.

Wicked's asset, however, is undoubtedly its heroine. Unlike the evil figure of our childhood fantasies, Wicked's "Wicked Witch of the West," Elphaba is not evil, but a compelling and honest character. Maguire's Elphaba will make you question the nature of morality. And it will make you wonder what is it that makes a person good or evil? Intent or action?

In Wicked, Gregory Maguire has re-created and populated Oz with the power of his own imagination. Fantastically real, after reading this novel you will be unable to see the Wizard of Oz in the same way again.

I believe, Frank Baum himself would be flattered. 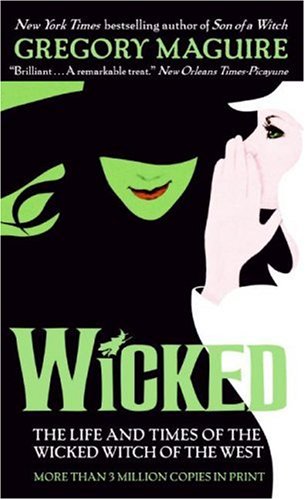