The Perks of Being a Wallflower by Stephen Chbosky | Teen Ink

The Perks of Being a Wallflower by Stephen Chbosky

Fans of Emma Watson have probably heard by now that she will be starring in the film adaptation of the quirky book The Perks of Being a Wallflower by Stephen Chbosky. The novel has been challenged multiple times since its publication and several of the reasons include the books views on homosexuality, drugs, and suicide; dark topics for any reader to handle so if you aren’t up for such themes, I suppose you need not read on…though I wish you would read on.
A friend recommended Perks to me but I wasn’t very excited to read it. The story sounded interesting enough, but I’ve always been skeptical of epistolary novels, that is, books written in document form (in this case letters). I’ve only ever found a couple such books that I’ve liked and I don’t know why this is, it seems like a perfectly creative and interesting way to write a book, but there’s always been something about it that’s put me off. I have to say, after I started reading the book, I could not feel more different about reading a story through letters. What a brilliant idea!
Written by Charlie, a freshman in high school who struggles both with his aunt’s death and entering high school without many friends, the letters are sent to an anonymous person that Charlie once heard being mentioned as someone who listens and understands. Charlie begins by saying that he doesn’t want the receiver of the letters finding out who he is and for that reason he will change all the names in the letters. Soon after Charlie starts writing the letters he becomes friends with two seniors, Patrick and Sam, who quickly take him under their wing. Charlie is never bothered with the idea of “fitting in” as many high school students are. Charlie doesn’t seem bothered by not fitting in partially because he has bursts of depression which stem from being sexually abused as a child, a fact that isn’t revealed until late in the book.
The one thing I had a problem with was I could somehow connect better with Sam and Patrick than I could with Charlie himself. I formed a particular link to Sam and I think this could be because I admired her so much as a strong female who knew exactly what she wanted and how to get it. The story of Patrick and his secret relationship with a boy, who has a girlfriend and publicly insults gay people, was probably a favorite part of the book for me and made me both respect and pity Patrick. Of the three, I actually like Charlie least. He’s too much of a wallflower for my taste, which I suppose is the whole point of the book, but I often wished he would stick up for what he believed in more than he actually did. I feel that Chbosky also tried too hard to make him a wallflower than was really necessary. It’s true Charlie is often an observer and often immature in his view of the world, but he is in fact a very mature sixteen-year-old and this isn’t always displayed. Though his English teacher realizes his maturity easily and helps him develop it.
As I’ve said, I’ve never really liked novels written in the form of letters, but this one was different. I actually liked that it is an epistolary novel. It becomes clear that Charlie is confiding in someone and the fact that his confidant isn’t named is never a real issue. Charlie himself discusses that sending letters is something very real and more so than simply writing in a journal. By writing letters, you know that someone else is reading them and is reacting to them. A clever technique that Chbosky makes use of as the book progresses is altering Charlie’s writing style. It’s obvious that Charlie makes use of what he learns throughout the school year as his writing and voice become more mature. Seeing his education develop makes it easier for the reader to feel that they are there when the story is really happening because it’s evident the protagonist isn’t telling us about events that happened in the past. I love when an author puts that much thought into what it is their writing, when they pay attention to the small details that seem colossal to readers who take the time to admire the writing for what it is. The book is short and sweet and the several emotional parts had me clinging to the pages and wiping away tears. 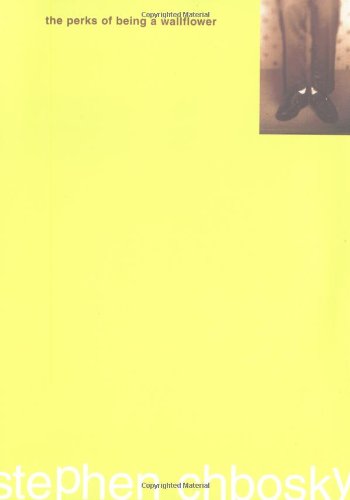