A Year in Provence by Peter Mayle | Teen Ink

A Year in Provence by Peter Mayle

Everyone dreams, at one time or another, of abandoning the jobs, bills, and stress of their everyday life and to go somewhere where they can simply relax in the sun, eat delicious, unique food, and take long walks through a picturesque village. But few people actually go through with such a desire unless they simply go on a week-long vacation. Peter Mayle and his wife, however, did go through with the scheme, and shared his experience in a book that chronicled their month-by-month tale of A Year in Provence.
He leaves the life of a business man in crowded London to take up that of a freelance writer in sleepy Provence. But Mayle and his wife struggle to adjust to life in the sublime countryside of France as they go through the impossible task of buying a car, the harshness of Provencal winter, and the difficulties of owning a 200 year old French farmhouse. “We went to buy a car to buy a car. [The model we wanted] is not much more complicated than a sewing machine, and any reasonably competent blacksmith can repair it…Apart from the fact that the suspension is made of blancmange, which makes it the only car in the world likely to cause seasickness, it is a charming and practical vehicle.” No matter the documents they produce, the auto salesman “with an expression of infinite regret, [shakes] his head…Non.” They eventually try to go to a bank but “It was lunchtime. The two areas of endeavor in which France leads the world – bureaucracy and gastronomy – had combined to put [them] in [their] place.”
Apart from the physical differences of living in a different country, they go through an adjustment to the French mindset, which is visibly very different from that of the English since, “[the French] spend as much of their income on their stomachs as the English do on their cars and stereo systems.” The couple experiences the traditional French holidays and traditions which span from six course meals to the dreaded mistral wind to their discovery of the French bureaucracy. The mistral is a cold regional wind in France and basically translates to ‘masterly’. “‘Another tombstone,’ he said, ‘It’s this weather. The old ones can’t take the cold.’ He looked around for his hat, retrieved it from his head, and covered the phone again, hiding the bad news.” Even when describing an obviously tragic circumstance, Mayle is able to add comedic relief with his portrayal of the man.
While reading through Mayle’s month-by-month autobiography of a year, I couldn’t help but laugh or gasp at his hilarious anecdotes. Mayle was simply telling his everyday experiences of life in the French countryside, but every scene was side splittingly funny or tear jerkingly upsetting. Mayle has a great voice and style of writing; he adds excitement even to a plumbing replacement or house renovation! “Life had changes, and the masons had changed it. If we got up at 6:30 we could have breakfast in peace. Any later, and the sound effects from the kitchen made conversation impossible. One morning when the drills and hammers were in full song, I could see my wife’s lips move, but no words were reaching me. Eventually she passed me a note: Drink your coffee before it gets dirty.” This excerpt clearly illustrates his light tone and great comedic flair.
The book is written with great insight to the interchangeable souls of people from different countries despite their obviously different manners and mentality. The book practically picks you up and tosses you into the midst of Provencal life. The scents are poignant, the colors vibrant, the sunshine blinding, the winter wind biting, and the food savory and delectable. After reading this book, one of my greatest wishes is to visit the French countryside and experience life the way the French do, finding pleasure in every task, basing your daily schedules around the stomach, and live by a beat ruled by seasons and not by days. 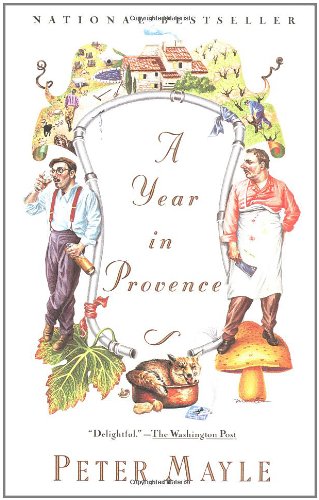