Much of a person’s life is forgotten, yet do these lost moments retain an unseen hold? Margaret Atwood in her novel Cat’s Eye weaves an intricate tapestry of one woman’s life and search for identity. The story unfolds in two periods in the life of Elaine, a talented surrealistic painter from Toronto, Canada. One thread is a coming-of-age story, while the other offers the reflection from becoming of a “certain age.”


Elaine, the protagonist of the story, is an acclaimed artist who paints surrealistic images that are rooted in her troubled childhood. Before the age of eight she lives a peaceful life with her family, collecting field specimen for her entomologist father. When her father acquires a position at the University of Toronto the family’s nomadic lifestyle changes and with it Elaine’s sense of order. All attempts to fit into the social structure of girls leave Elaine anxious and depressed. She becomes the victim of bullying by her best friends, responding by withdrawing and peeling the skin from her hands and feet. As an adult she has no conscious recollection of these events yet paints them in excruciating detail in her work.

Elaine loathes Toronto. Upon returning to the city for her retrospective she relates, “the fact is that I hate this city. I’ve hated it so long I can hardly remember feeling any other way about it” (14). This sentiment mirrors the feelings she has for herself when she is there. As a child, she feels inadequate and flawed while in Toronto, yet traveling north with her family in the summers she is comfortable in her own skin. As an adult returning to Toronto, she thinks she should be seeing the positive changes noted by others, but these are hollow to her eyes. Toronto is not New York, and as an artist the critical acclaim she receives in Canada does not translate to genuine success. However, the retrospective of her art becomes secondary to the internal retrospective of her life as she retraces the neighborhoods of her childhood. She recalls memories that were long suppressed and is able to resolve much of what haunts her by revisiting the locations of key events.

Cat’s Eye is a powerful novel that reinforces Margaret Atwood’s reputation as a queen of the Canadian literary scene. The book never lags, as it follows Elaine on the quest for her self through memories of her past. It skillfully transitions between two eras using flashbacks and foreshadowing with ironic twists. There are many layers of complexity which include details from zoology, physics, and the fine arts, yet it is delivered with no pedantic overtones. Rather, these support the psychological theme that all memories, be they conscious or not, are integral to ones identity. The book is flawless. 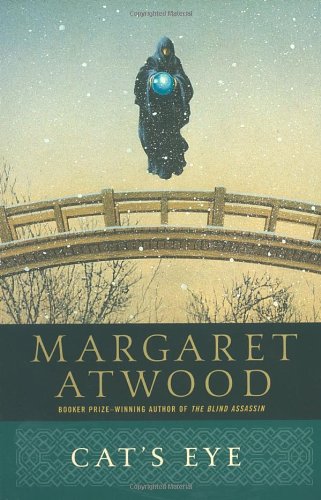