Maid of Secrets by Jennifer McGowan

Meg Fellowes has been a part of the Golden Rose acting troupe for as long as she can remember, living her life as a thief. Since women were not allowed to act on stage, Meg played rolls right on the street, transforming herself into a different person before picking people’s pockets. She was well-known throughout the troupe as the best thief they had; how could she not be? Her grandfather—former leader of the troupe—trained her himself. Meg prided herself in being able to lift large amounts of wealth from people’s pouches without them noticing…until one unfortunate day when she picks the wrong pocket. Instantly, Meg is spotted and rushed to the court of Queen Elizabeth. Fortunately for her, the Queen has other plans for Meg instead of prison. Just like that, Meg is thrust into a group of spies with four other extraordinary girls in the Maids of Honor, the Queen’s secret society of defenders. Together, they are forced to train, study, and work with each other to find the mysterious perpetrator who has been causing death, distress and despair in the Queen’s court. Along the way, Meg gets an education, finds herself, and meets a refined, handsome, young, Spanish Count. With danger crouched behind every corner, England better hope God will save the Queen…or the Maids will.


Jennifer McGowan has a rare, amazing talent: she can create an amazingly diverse group of characters and mix them together without a catastrophic outcome. Not only can McGowan do this, but she manages to produce an amazingly addicting book full of mystery, romance, and hope. For this, I truly admire her. 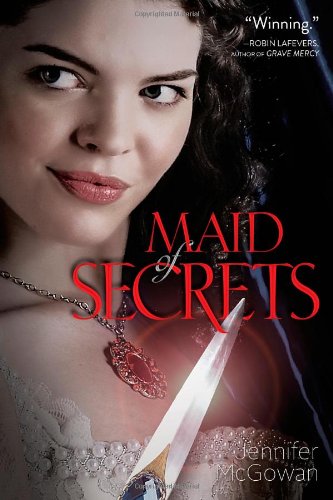