Favorite Quote:
"Be the change you want to see in the world!"

I chose to read Million-Dollar Throw by Mike Lupica (published by Scholastic, Inc.). Mike Lupica is the author of several New York Times bestsellers, including Travel Team, Heat, and The Big Field. The main theme of Million-Dollar Throw is that young Nate “Brady” Brodie has the chance of a lifetime to do something incredible for himself and his family and best friend Abby. I really enjoyed reading this book; it is expertly written and contains an excellent story of family life and the power and love of friendship.
There are a few important points in Million-Dollar Throw. First, the biggest point is that Nate’s friend Abby is rapidly going blind and has a hard time seeing everything. Second, Nate gets his big chance to throw a million dollar throw because Abby signed him up for it. Third, Nate goes through many difficulties in his football team before the big throw on Thanksgiving night. And finally, Nate has the opportunity to do something incredible for Abby and his family if he successfully completes the throw.
Nate has always known that Abby is going blind, or will eventually. But during the course of Million-Dollar Throw, Nate has to get used to that Abby is very rapidly going blind. Abby suffers from a disease called “retinitis pigmentosa,” which destroys a person’s ability to see. “Nate looked up retinitis pigmentosa…and found a ‘Fighting Blindness’ website…” there were pictures that showed Nate how the world looked normally and through Abby’s eyes. “As seen by Abby. Abby through the keyhole.” Nate got the chance to throw a million dollar throw because Abby signed him up for it, with some help from Nate’s mother. “She signed, he signed…at the end of the month the winning number would be drawn….” During the time before Thanksgiving night, when he would make the throw, Nate went through many difficulties. He had trouble being his teams’ quarterback, he hurt his hand while playing, and he even got benched for a few games because he had difficulty throwing. The final plot point is that Nate had the opportunity to help his family pay off all of their debts and to help Abby with her eyesight if he threw the ball through the target and won the million dollars from doing so.
I think that Mike Lupica’s purpose for writing Million-Dollar Throw was to give a heart-warming story about friendship and what it can achieve for yourself and others. I am confident that this was achieved because that is what I felt while I was reading Million-Dollar Throw. I thought that Million-Dollar Throw was very entertaining and insightful to the viewpoint of a partially blind person and how others are around them. All of the characters in Million-Dollar Throw are realistic. The main character is an athlete, the friend has a very real disease, and all of the difficulties can happen to anyone.
The main point of Million-Dollar Throw is friendship and the power it contains. There are smaller points of blindness and how it affects everyone involved, have the luck to do something incredible, and being able to do that incredible thing that benefits many people. I really enjoyed reading this book because it is expertly written and contains an excellent story of family life and the power and love of friendship. The more I think about this book, the better it gets and the more power it holds. 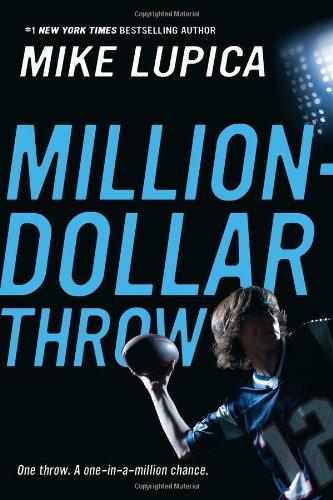 
Buy from Amazon
The author's comments:
I wrote this article as a book review for my English class. We were allowed to write in first-person. I hope that anyone reading this article will find the book intriguing.
Post a comment
Submit your own