Words hold people captive with their sounds and meanings. Words possess the ability to surpass time and circumstance and proceed directly to emotion. They can uplift a person or sway him, but above all, they can carry him far, far away.
In A Northern Light, words mean the world to protagonist Mattie Gokey. Ever since the death of her dear mother, times have become trying, and she turns to the worn pages of her novels for comfort. More than anything, she dreams to attend college in NYC and become a writer, but her family is not financially secure and her goals appear to be unreachable. Every penny she earns is needed by her father to purchase basic necessities, and Lou, Beth, and Abby cannot imagine life without their beloved older sister. So Mattie keeps her dreams locked up inside, privately wishing and scheming to discover a way, some way, to journey to NYC. The reader shares her desires, if not her unique challenges, on every page.
An original, utterly believable supporting ensemble, including a rebellious undercover teacher, a witty schoolmate, and a handsome but dull next door neighbor, brings complexity and color to Mattie's journey. Mattie's alternatives to a life in NYC include marriage to the handsome Royal Loomis, who despite his attractive features
retains the intelligence of a rock and has no appreciation for Mattie's interest in literature. Her other option is to take up a fulltime job at the city hotel and send the majority of her salary back home. She decides upon this choice, though her ambitions for college and love for Royal conflict. Donnelly brings to life the trials and tribulations of Mattie Gokey, and it is nearly impossible not to feel her confusion. The reader will surely find him or herself rooting concurrently for Mattie to marry Royal and to abandon him in the dust. Donnelly's satisfying, multilayered novel is written with engaging, earthy vigor. She ranges from broad humor to honest, incisive literary criticism. But it's virtuous, passionate Mattie who carries the tale and makes the story a phenomenal read, as she aims to see clearly and act well.
There is never a boring moment to this tale, as the readers are constantly kept on the edge of their sears. At one point in the novel, Mattie's thoughts are suddenly disrupted as a hotel guest presents her with an abnormal request: to dispose of a mysterious bundle of letters. However, when the body of that same guest is pulled from the depths of the lake surrounding the hotel, Mattie is faced with a difficult decision: either follow her instincts, or keep a promise.
Based upon the same true story that inspired Theodore Dreiser's An American Tragedy, Jennifer Donnelly's Michael L. Printz Award-winning and Gateway Award-nominee A Northern Light effortlessly blends history, romance, and even some mystery. Divinely structured between present and past, the novel digs deeply into Mattie's life and when and where she lives it, at poverty, racism, loss and circumstance. Many will connect with Mattie's fierce yearning for independence and for stories, like her own, that
are frank, chaotic, complicated and inspiring. Donnelly's wonderfully crafted characters ring true to life, and the precisely detailed setting develops a rich backdrop to this eloquently crafted tale. Mattie Gokey is a believable, unforgettable character, and her story is the true epitome of the power of words. 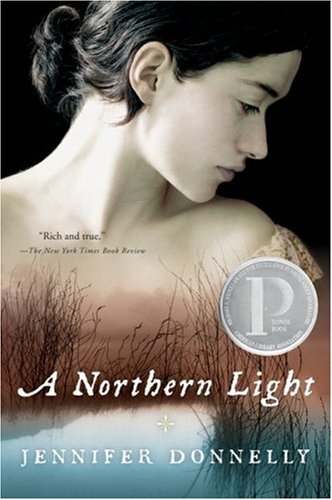