This Is the End | Teen Ink

This Is the End

This Is the End is a movie revolving around six actors and how they live through what they believe to be the end of the world. When Jay Baruchel flies to LA to visit his best friend, Seth Rogen, he plans to just chill with Seth Rogen. However, Seth takes Jay to a party at James Franco's house to see some of his buddies. Jay isn't friends with the same people that Jay is, so he feels left out and unwanted. Because of this, he goes outside to smoke cigarettes, but realizes he's run out of them, so Jay and Seth go into a store in town to buy some more cigarettes. While they're there, an earthquake occurs and damages the entire store, and blue light comes down from the sky and lifts up people that were in the store. Seth and Jay immediately race out of the store and head towards Franco's house to learn that they haven't been affected yet. However, within a few minutes, the earthquake hits James's house and causes everyone to panic. The hundreds of famous people inside of the house race outside, but they get injured from fire, a hole in the ground, and things falling down. Because of this, only five people make it back to Franco's house alive: Craig Robinson, Jay Baruchel, Seth Rogen, James Franco, and Jonah Hill. The group of friends must learn to save their food in order to survive and must stick together to have any chance of survival.

After the first day of survival, the next morning, they discover that Danny McBride fell asleep in the bath tub in the house. Danny has trouble following the rules and continues to not understand the fact that they need to save their food. He especially has issues with drinking the amount of water that he's being told to drink. As provisions start to decrease, the friendships of everyone starts to weaken. As the apocalyptic behavior continues outside, Jay tries to convince everybody that his theory of this being the apocalypse from the Bible. Craig Robinson soon believes this theory after he goes outside and sees a monster that matches Jay's description. That monster has seven heads and is basically a combination of Satan and the devil.

Because the actors are all playing themselves, the movie is scores of fun and is exciting, entertaining, and interesting beyond belief. The movie is intense and packed with one of the greatest casts of all time. The visual effects in the movie are stupendous. The ending of the movie is heartwarming but slightly predictable. Overall, this movie is an absolute must see, because it is a hilarious comedy with a great plot and an even better cast. This Is the End is more than deserving of their high 83% rating from Rotten Tomatoes, which is especially high for a comedy. 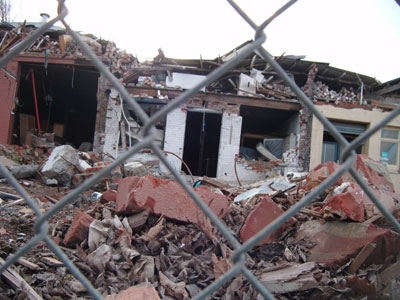