Favorite Quote:
"To be nobody but yourself in a world which is doing its best day and night to make you like everybody else means to fight the hardest battle which any human being can fight and never stop fighting."
- E.E. Cummings

Foxcatcher (2014) serves as a storytelling masterpiece as it scrutinizes the human psyche’s acute obsession for respect and the unbearable burden of anxiety in neglect. Under the helm of the visionary auteur- Bennett Miller, this bizarrely thought-provoking psychodrama, based on a tragic true story of two Olympic wrestlers, nets the audience's minds from the first scene and puts our hearts in a chokehold until the very last. The story reaches its climax when we least expect it to, leaving us emotionally shaken from the cathartic release of the pounding thematic conflict. E. Max Frye and Dan Futterman have excelled in crafting a near-perfect screenplay, tracing the personal downfall of all three central characters of the film- a rare creative choice in cinema.

Having written Capote (2005), Futterman is renowned for working with Miller. His dark ending scenes harmoniously harp on our emotions. In 2014, this film garnered critical acclaim from a worldwide audience and bagged the coveted Cannes Best Director Award, along with Oscar nominations for Best Original Screenplay and Best Director.

We find ourselves in 1987, three years after the 1984 LA Olympics which won Mark Schultz (Channing Tatum) and Dave Schultz (Mark Ruffalo) gold medals in wrestling.

But in the years that followed, Mark was excessively overshadowed by the success of his elder brother- who raised him. Naturally, he craves attention from society- having been previously 'unrecognized'. His fortune has trickled down and we empathize with him as he lives all alone on free food from supply shelters.

Dave, on the other hand, has a life that contrasts Mark’s in every visible aspect. Having already received heartfelt patriotic gratitude from almost everyone for his exemplary career in wrestling, he now happily thrives in a laidback livelihood with his wife and children. The only common ground that the two brothers share is their passion for wrestling.

But one fateful night, everything changes. Enter Charles Du Pont (Steve Carell) “of the Du Pont family”- an eccentric millionaire with a sole ‘American’ dream of raining glory upon his training company called ‘Foxcatcher’. He persuades both of them to join an elite squad of the US national wrestling team for the 1988 Seoul Olympics, in the name of patriotism.

It is easy to see that Mark’s hunger for fame, not the love for the sport, drives him to join Foxcatcher. Dave instead decidedly stays back as he now cherishes his settled family life more than anything. His denial of this opportunity feels like a distasteful rejection on the face of Du Pont, an aristocrat who is used to subjugating his opinion on others.

Upon his arrival, we feel elated to see that Mark is heartily welcomed into the camp and is celebrated like a champion. Du Pont showers him with his luxurious comfort- much to the contrast of what he was living in, back home. On being offered the opportunity to even name his entire paycheque, Mark requests only a bare twenty-five thousand from this plutocrat. This satirical moment serves more as a terrifying reminder of the class differences that define modern capitalistic culture.

But Du Pont is no professional athlete- having spent his days living a life of excess at his colossal Pennsylvania mansion; he is just a nerdy fan of the sport. As we are absorbed deeper into the story, it is not before halfway through it, that the screenwriters make us anticipate his flaws. He is nothing more than a pompous man eager to swell his reputation in something he is under-qualified for. The film hints at the often-desperate times when he fails at establishing himself as a respectable figure in the eyes of others around, especially his mother (Vanessa Redgrave) - who disregards wrestling as a mindless brutal sport. This mannerism plunges him into a downward spiral of greed to succeed.  We cannot help but notice the capricious pride that haunts Du Pont’s behavior as he vents out his frustrations through emotional authority. He is a self-centered tycoon with, ironically, deep maternal issues.

Widely celebrated as an iconic comedian for his work on The 40-Year-Old Virgin (2005) and Office (2005-2013), Carell’s unexpected gut-wrenching performance in this film establishes his creative identity as a finesse versatile actor. The rich screenplay bolsters the narcissistic context underlying Du Pont’s character. He casts an impression on our minds for years to come, owing to the revelatory grin donned by him during the intense moments of the film. The grin comes off as a careful patchwork of three elements that are fundamental to the film’s philosophy- anxiety, annoyance, and arrogance. Miller’s conception of comedians having a darker personality holds as he triumphantly channels his soul in the wonderful portrayal of Du Pont. His peculiar nasal voice echoes the well-written dialogue in our minds. Behind layers of facial prosthetics, Carell is quasi-recognizable and invokes our curiosity from the moment he appears. This remarkable achievement in acting and make-up scored the movie two more Oscar nominations in their respective categories.

Mark and Du Pont’s common goal of fame in life knots them together in a friendship that is prosperous to both their desires. He heavily lauds Mark’s talent and promotes him as a decorated champion in a celebratory fashion. Living up to the expectations of a mentor is a universal desire that pulsates through all of our hearts. We cannot help but relate to the harrowing possibility of a future defeat that foreshadows inside Mark and breeds anxiety in his soul.

Miller emphasizes the fact that Du Pont's paranoid craving for honor is born out of deep sorrowful neglect in his adolescence. This reaffirms his societal identity in the minds of the audiences. Bonding over their experiences with childhood neglect; Du Pont slips into a mildly parental and subtly sexual relationship with Mark, who now looks up to him as his godfather.

However, their struggles to establish individual peer dominance shockingly tear their duo apart very soon, throwing Mark into an unaffectionate lonely corner of his own mind. This leads to the arrival of Dave on the farm as a replacement, leaving us with brooding thoughts of second-hand embarrassment for him.

Only now it occurs to us that the sinister intention of Du Pont to bring him onto ‘Team Foxcatcher’ was to forge a selfish alliance with his more eminent brother. The harsh realization of this newfound truth eclipses Mark with disdain. Crippled with the bane of disapproval, he also flounders in the international contests.

But we feel tenderly relieved when Dave’s presence on the wrestling squad only serves as an emotional backbone for a struggling and unstable Mark to lean on and allows him time to reconcile his relationship with his brother that has been sabotaged by his ambitious drive. Dave's skills are unrivaled by Du Pont's and his affection towards Mark infuriates him with distrust. As the story unfolds, we helplessly witness the emotional dynamics that churn the lives of these three men. Like most of us who are plagued by an inferiority complex to prove ourselves better, Du Pont unabashedly starts preaching hollow wisdom on the significance of him being a father figure to the entire Foxcatcher team. The schizophrenic Du Pont is also deeply appalled when he learns of Dave’s sheer reluctance to side with his interests.

Dave’s character is a fragile framework of a young athlete’s mind and a family man’s heart. The result is a soft-hearted feel-good personality that we can subconsciously sympathize with and trust through the agonizing uncertainty that dwells inside Mark and Du Pont.

Throughout the film, Ruffalo and Tatum deliver impeccable performances that flesh out the conflict in their arc through vivid expressions of the varied emotions that they undergo. The deeper personal struggles that the script structures them around are highlighted by their whole demeanor. Ruffalo was later nominated for Best Supporting Actor.

Though Foxcatcher revolves around the fan-favorite sports genre, it stands far from the expectations of one. Miller’s intended vision for it was to portray abuse, suppressed homoeroticism, and hereditary succession through a cult narrative that also realistically reflects the uncanny realm of a toxic silk-stocking society. Resultantly, on the first watch, it may sting like a slow-paced documentary to audiences who have grown accustomed to a more traditional style.

During the multiple games that play out on-screen, the minimalistic music and brilliant sound design help us figuratively taste the experience of an actual wrestling bout. The grim color palette makes this film’s theme follow in the footsteps of Capote. Miller capitalizes on his cinematographic experience from Moneyball (2011) with the occasional usage of extreme-wide shots that pan across sporting arenas and set the stage for the story’s dramatic tension. This visual storytelling establishes it as one of his finest works.

The story’s premise is designed around this grueling sport, which serves as a precise metaphor to the excruciating psychological tussle of both Mark and Du Pont- as they grapple for glory until the devastating end. This theme rests on a fine line that separates patriotic honor from a vicious capitalistic obsession. 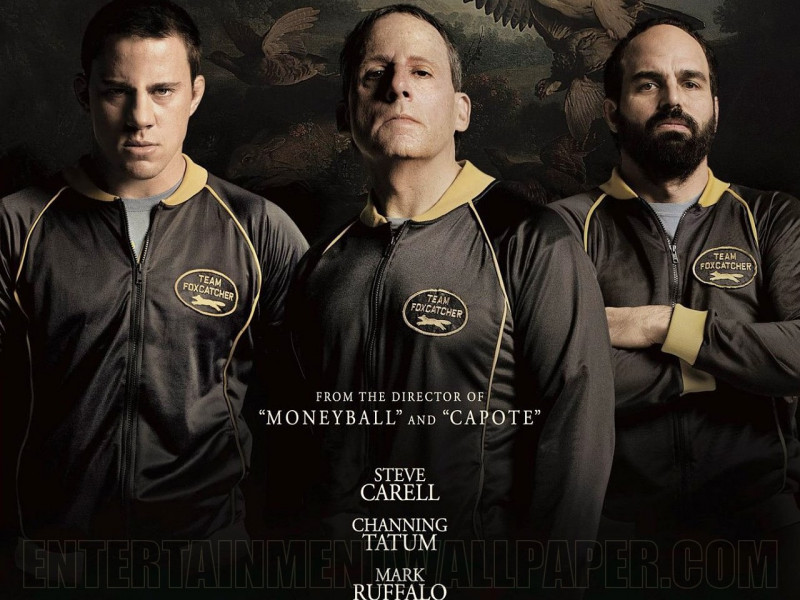 Foxcatcher is a character study of greed, toxic obsession, and respect in the rich underworld of capitalistic empires. This unique theme prompted me to delve into the critical appreciation of this Oscar-nominated film.