The trailers for Easy A were rather provocative, drawing in attention and teasing the audience with the movie’s juicy plot line. The hype was built up for this teen comedy, especially because of the well-loved Emma Stone’s lead role. But did Easy A meet its expectations?
The plot line is Olive Pendergast (Stone)’s narrative of her side, the “true” story of how some small lies spiraled out of control, transforming her social standing from a nobody to an infamous tramp overnight. Olive is a quiet, relatively innocent girl, but initiated by a tiny lie to her best friend Rhiannon (Alyson Michalka), her life turns upside down. A lie about her weekend activities becomes a lie about losing her virginity, and her small mistake is covered up by more lies and becomes a divisive and carefully manipulated PR campaign. Contributing to Olive’s social demise is the antagonist Marianne (Amanda Bynes) who heads a Christian group that antagonizes Olive for her apparently shameless sex life. Olive begins to take bribes from fellow classmates in exchange for saying that she has slept with them. Nathaniel Hawethorne’s The Scarlet Letter comes into play as Olive’s English class happens to be reading it at the time. Some parallels are shown between the misunderstood Olive and Hester Prynne, such as Olive deciding to stitch a scarlet A on her clothes. On a side note, Olive shouldn’t be considered a modern-day Hester as the two characters are irreconcilably different. Hester Prynne is presented to be meek and innocent, trying to redeem herself while Olive shamelessly uses her promiscuous reputation to build up her popularity. Olive’s crisis reaches its tipping point when her best (and only) friend Rhiannon joins Marianne’s anti-Olive group.
Though the plot was intriguing and engaging, at times it was too complicated that the viewer would have to sit back and try to figure out all the connections between the characters. The performances of the actors had the capability to impress, though the cast was not a batch of A-list stars. The acting of especially Stone and Michalkha impressed me very much, although Stone’s portrayal of Olive seemed to lack subtlety at times.
The excellent execution of Easy A will bring mixed opinions: because of the sexual content of this film, I would find it awkward to watch with family. At times the movie left me wondering how it had a rating of PG-13. Despite the appropriateness factor, it was an enjoyable, funny film to watch. Everyone will love the comedy in it and who wouldn’t find some steamy drama the least bit welcome? 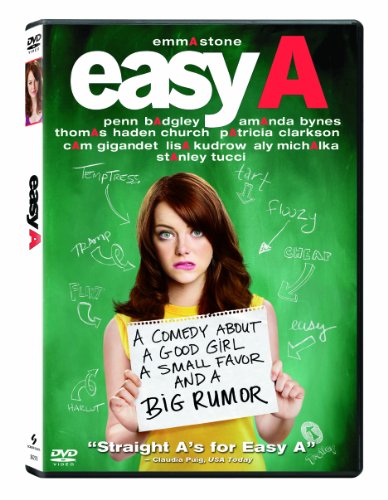