Mike O'Donnell gave up everything for his girlfriend and their newly conceived daughter. Now, what meant everything to him when he was 17, is the last item on his list of priorities;probably the reason that he and his wife now find themselves in divorce court. But when his "spirit guide" gives him a second chance at his 17th year, he must decide whether or not the life he left behind for his family is truly where his heart lies.

This film is Zac Efron's second attempt to break away from his Disney image, the first being Hairspray, and I must admit--unlike many other former Disney stars attempts at a break-away which end in utter failure as either a washed-up child star or a slut--he has done a fine job. While the movie, even with some editing, would never be Disney Channel appropriate, it isn't entirely inappropriate for teenagers to watch and with the message, it's not a waste of two-hours.

The message behind 17 Again is one I was shocked to see in a highly anticipated teen comedy; especially with High School Musical and Hairspray star, Zac Efron, being the movies front-man. The message Mike O'Donnell's 17-year-old alter ego, Mark Gold, attempts to ingrain into the minds of young girls is sexual abstinence. While the language is not family appropriate and the humor is sometimes crude, the message is clear and true, keeping 17 Again high on my favorites list.

Some may find the cougar-style romance Mark attempts to bud with his soon-to-be ex-wife slightly awkward and Ned's advances at the high-school principle will leave many in the audience blushing at his indecent pick-up lines, but for an audience of primarily teens, the film is quirky and filled with comedy that will leave you laughing for days afterward. And, apparently, Zac Efron will leave girls breathless and even boys will enjoy the movie; my sister's boyfriend couldn't stop talking about how much he loved 17 Again and I'm sure you'll agree. 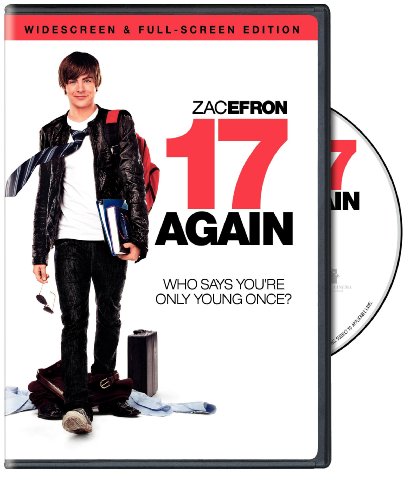 
Buy from Amazon
The author's comments:
..although, I must say, after viewing this film, I found myself with the dire need to watch The Lord of the Rings. ;)
Post a comment
Submit your own

View profile
Oh! Haha, at first I was like what does this have to do with the review, but then I remembered. No, I don't know if I've ever seen the extended versions. I haven't watched in a long time, but I'm reading the books now and then me and my dad are gonna have an LOTR marathon.
TheJust ELITE said...
on Apr. 6 2011 at 10:19 am
TheJust ELITE, Ellenton, Florida
254 articles 202 photos 945 comments

View profile
Extended editions of what?