I want to write something about a 2003 film, called Elephant. You probably never heard of it. That because it was only screened at Cannes, a few other select theaters. It also didn't use any known actors or celebrities (although Diane Keaton did produce it, and Gus Van Sant was its director). It deals with something all high school students have heard of before.
Shootings. School Shootings.
We get checked for weapons and depression. All the time. It can be a little annoying, having to go through a metal detector and listen to a half hour ramble by a guidance counsler, begging us to talk about our feelings. But we need it. Why? Because destroying another's life while your a fickle and irresponsible teenager is not cool. And this serious and dangerous topic is explored in Elephant.
It starts off with a view of the sky, and goes back down to earth to an American town, where one kid converses with his parents, another kid takes photos, a boy plays football, a girl attends a class, and friends greet each other casually. And the most interesting part is, that it all seems so real. Like there's no script, no acting. Just a normal school day, on a chilly fall morning, with a bunch of students getting their education.
So at first, you think theres no point to the movie. Just teens, fooling around, running, joking, like their unaware of a camera, floating around them. But as you meet each character, each kid, you see the same scenes repeat themselves. But in each kid's point of view. This is important, as well as interesting, because I've never seen a movie use that technique in such a cool, real, way. Right, so then, the camera follows around this one kid. He gets teased in school, and isn't exactly a player with the ladies. But he seems totally normal. He comes home, drinks some milk, plays some piano, hangs out with a buddy.
But then things get really creepy.
Because hes not just hanging out. No, he's planning. This kid is watching old Hitler tapes, ordering gun, planning and organizing. You start putting together those hints, and you know that its him, and you know what he's going to do. But as I said before, it seems all unscripted, all normal. Theres no evil glint in his eye when he reviews his plan with his accomplice, no strange way of dressing, and no disturbing laugh. The key phrase to the plain, he says, is 'to have fun'. Remember, this movie is about a high school shooting. And that phrase is too sick to say normally. So they go, to the normal high school with the normal folks, and then the terror comes out. But as all the characters, kids you meet get gunned down, there is no creepy music, like in all the movies. No awesome kung fu fighting against the bad guy. There is nothing that tells you this isn't really happening. That those screams aren't real, that those children aren't dying and all that blood and choking has been staged. But then the gunshots become public knowledge, the footsteps of running children start to echo, and you get that feeling. You know that feeling. The feeling of when suddenly, places full of life, become empty, dead, and lonely. Like when a party ends, or the school closes, and your the only one left there, and you feel so strange being there, with everybody gone. With nobody there, no evidence of the laughter that you were apart of fifteen minutes ago. Its the same feeling, that same, real feeling, that I have never experienced watching a movie before. And you see this one guy walking in those lonely halls, confused but cautious, and suddenly, he gets shot.
But thats it. He's shot and its over. No music, no close ups of reactions, no last dramatic words. He's shot, and the scene goes on like it never happened, the gunman keeps walking, the screams keep going, the footsteps still echoing, and it seems like nobody but you, the watcher, realizes in horror that this, this, disgusting, person just destroyed the most beautiful thing there is on this planet. Life.
And that feeling is so real, you almost can't watch anymore, and when the movie closes up, the sky is shown again, and you look around, and you know the next scene is your own, real, life, back down on earth. And the feeling is exuberating, and relieving. The fact that your still here, even though those people aren't. And I'm saying that because this movie does have its basis on a few different school shootings, and those same chatting friends you saw aren't here, but you are, and that realization makes life so much more real. So much more precious.
This movie is precious, it really is. Its a piece of art, and it says so much to the world, while still being real, and not fantasized. A seriously important part is the title, coming from the idiom, 'theres an elephant in the room' meaning when you deny an obviously very big problem. So please make sure to tell somebody, if you see an &#39elephant', a depressed, hating kid, who can possibly do the same thing to you and your friends, like the elephant in so many real shootings. 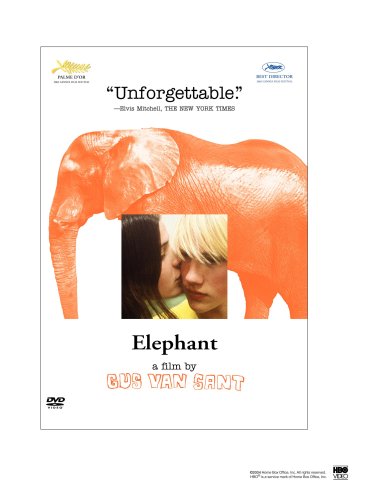