Coming back with an all-singing, all-dancing ­spectacular finale of the terrific ­trilogy wasn't going to be easy. But Disney did it again as “High School Musical 3: Senior Year” explodes on the big screen in a huge, colorful ­display to delight youth and parents alike.

Unlike its predecessors, “High School Musical 3” was produced by Walt Disney Pictures for the box office, rather than for TV – and it shows. A bigger set, better costumes, and more spectacular musical numbers make the final film a success. Although the previous two may have been enjoyed by more of the younger generation, the final installment has something for everyone and is perfect for families or teenage girls who want to squeal hysterically at Zac Efron on the big screen.

As Troy (Efron), Gabriella (Vanessa Hudgens), Sharpay (Ashley Tisdale), and Ryan (Lucas Grabeel) approach the end of high school together, they have some big decisions to make and lots of things to do. But with the pressure building and the competition mounting, can they remain friends until the end of the year?

The soundtrack is guiltily ­enjoyable. Featuring songs that are slightly less cheesy, but with that Disney magic we all know and love, it's the kind of music you might actually listen to along with your usual music. Catchy numbers like “Scream” and “The Boys Are Back,” teamed with ballads like “Walk Away” and “Right Here, Right Now,” make a perfect mix of soundtrack pop. Not to mention you'll be singing the final song, “High School Musical,” for hours after leaving the theater.

So, if you've seen the previous two, finish the journey with this one. You won't regret seeing “High School Musical 3” as it is clearly the best film in the franchise by a landslide. 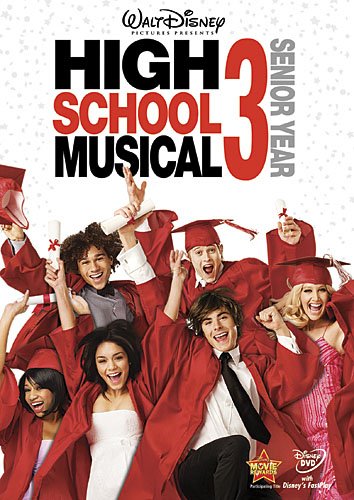 View profile
haha, i totally agree. the first movies are always the best, the second ones are ok, and the third ones just suck!
Moviebuff0202 SILVER said...
on Jan. 27 2011 at 7:41 pm
Moviebuff0202 SILVER, East Setauket, New York
7 articles 0 photos 15 comments

Favorite Quote:
"Be nice to nerds. Chances are you'll end up working for one. " - Bill Gates

Disney should stay away from live action in most cases...I seriously miss the days of Lion King and Princesses.

Tangled was good as was UP so Disney still does cartoons pretty well.

Favorite Quote:
A hero lies in you. if you wanna make the world a better place, take a look at yourself and then make a change. MAKE THAT CHANGE!!!!!!!!!
Be the change you want to see in the world.

The article was well written....

DISNEY FROM 2000 ON (WITH THE EXCEPTION OF PIXAR AND PIRATES OF THE CARIBBEAN)  HAS FAILED ON ALL LEVELS.  MENTALLY, SCRIPT-WISE, STORY-WISE, EVEN THE MUSIC IS TERRIBLE.

Favorite Quote:
'Love is a perfect bond of Union."

Favorite Quote:
"Every story has an end, but in life, every ending is just a new beginning."
-Uptown Girls