Favorite Quote:
“Try, reach, want, and you may fall. But even if you do, you might be okay anyway.
If you don't try, you save nothing, because you might as well be dead.” - Ann Brashares

The film is shot in an intense black and white, which amplifies rather than detracts from the tragic storyline of A Streetcar Named Desire, Elia Kazan’s film-make of Tennessee William’s heated drama. The characters – now classics – are enacted by excellent performers, in true thespian manner of the times. It is noteworthy that this was Marlon Brando’s breakout role, in which he also pioneered method acting– in employing it, he is beyond convincing. His skill in the craft cannot be ignored. While Brando is remarkable, he is not the protagonist of this tale. The film showcases Gone With the Wind’s Vivien Leigh, playing another iconic Southern Belle, miss Blanche Dubois.


The plot begins when she arrives at Elysian Fields – a heaven, though not by her definition - after taking a streetcar called ‘cemeteries’, and boarding ‘desire’- a certified metaphor to which the film remains loyal. Distraught by the misfortunate life she has created for herself, upper-class Miss Dubois arrives at the doorstep of her sister Stella’s – played by Kim Hunter – home in working-class New Orleans. Blanche finds the apartment is also inhabited by Stella’s brute of a husband, Stanley, and after seeking salvation, she finds herself instead retreating even more into herself, thus confronting her inner-most disturbances. It soon becomes evident that while Blanche is a tortured soul of knotted nerves and misconceptions and although tormented now by the Stanley – the character which Brando plays – her greatest nemesis remains her own self.


Blanche relentlessly spins a gossamer netting of deceptions, diverging further and further off the initial path such that if any piece were to come undone, the whole thing might very well collapse. At times, the audience might feel intense pity for her, and wish that she just be honest and avoid all the consequential blows. She often dictates what the correctness of a woman might be, more informing herself out loud than meaning for genuine conversation. This obsession with rightness of hers is the result of a need to be moral – her conflict with inborn ideals and her true self is evident in how she is constantly bathing in the film, compulsively trying to scrub away the ‘ugly truths’.


She never does shy away from her upbringing in speech - she speaks with all due Southern decorum, eloquently, and with a carefulness about her words that is layered with a slightly husky undertone. This characterization reveals a portion of her sensual self – you might even say it is her “naughty side”, so concealed beneath her seasoned words. However, her inclination to lecture is occasionally pointed out by the other characters as somewhat pretentious: Leigh provides a character so sophisticated in her unregistered insults towards Stanley – it is more poisonous than if she were deliberately vile. She speaks to him as though he were an anthropological subject of study, sorting him into an astrological sign and social nomenclature, which alone infuriates him. Moreover, she offers a full report to Stella – which Stanley overhears – about how so akin he is to an animal. Her failing to see how taking such a cultured perspective is in fact hurtful has tumultuous repercussions; it frustrates her sister and wounds Stanley irreversibly.


Where Stanley stares Blanche down, his disapproval is evident in the tightness that comes across Brando’s jaw, as though her were holding back a particularly hateful outbreak. Stella, who is played by Kim Hunter, acts as a level-headed mediator between them, dividing her affections between the two competing for it. Stanley’s contentedness with Stella choosing him over Blanche when he comes home is gold – he smiles in smug satisfaction at Blanche over her shoulder.


It is true that Brando’s Stanley has unrefined habits: his movement about the house and absent manners is characteristic of a teenage boy, irreverently talking over his mouth full - even when he speaks his mumbling would make it seem that his mouth is full. When he moves, there is a visible shift of muscle beneath his shirt, like a well-trained stallion. He is not just forceful, however, as he sometimes encapsulates an idealistic feline grace, seen in how delicately he picks off a piece of lint from Stella’s shirt when she speaks to him, or perches on the chair to study one of the plantation papers. In any case, he plays a true alpha male, and that is attributed to the marvelous acting again.


The apartment home is indeed his kingdom, where two rooms – including the bathroom – offer just enough area to pace a few angry steps, but too little for genuine privacy. With the play originally set to be performed on-stage, the adaptation to the big screen required some major decisions about set. So, while convenient for the performance of a play, the mostly one-set make of the film also results in a claustrophobic sense. It echoes the plot, as the cramped accommodation soon becomes Blanche’s sanctuary, and her hell, amplifying her increased succumbing to madness. Even the African Blues tunes from the lively neighborhood seem always to heighten the atmosphere, encapsulating the restlessness of the multi-cultural people. It is unclear at times whether the Versouviana waltz that accompanies Blanche’s fits is also diegetic or a composition direct from her mind, but either way, it is so smoothly incorporated that the audience is just as confused as the characters when she convulses.


What was evidently once a beckoning seductress now appears a frail, bleached-haired woman just in around her early thirties in Leigh’s Blanche. She is overcome by a brutal self-awareness of that, which causes her grief. Clearly she has experienced trauma, and now, as a mechanism of self-protection, negates the realities, fabricating ever inter-connecting narratives in their place. In this way, she succeeds in winning the pity of her sister, but not that of her tenacious brother-in-law, who sees through Blanche’s lies, which come off her tongue as easily as her prevailing chatter. Her ramblings are not unintelligent as she is very conscious in reality.
How appropriate that Blanche is clothed so delicately – like a butterfly – as she might tear or break by the hand of the ever looming Stanley Kowalski, who wears a plain t-shirt and jeans over a massive build. Brando’s Stanley is a savvy brute of sculpted muscle- brawn, and even brains – a terrible affliction for Blanche’s fragile illusion. Translating to be just as menacing on-screen as he is on paper, he terrorizes Blanche to the climax – a delight for which he adopts early on when, upon meeting, he teases her with impersonation of the cats’ meow channeling the rawest embodiment of the animal that he can muster. The ominous words from the original print echo as he does so: “we’ve had this date with each other from the beginning”.


The scenes run smoothly, with elegant jump-cuts between shots. Although it does include many prolonged takes of a face, an expression, someone speaking, and others, these elements are characteristic of the time in film when cameras were less agile, and long takes was ordinary for the audience. If ever there is camera movement, it at times pans over a shot, but besides that the only other variation is in the plot point where Stella and Blanche appear to walk from the bowling alley to the diner, with a cross dissolve making for the illusion that they walked straight from the one to the other. For a modern audience that is habituated to several, fast-paced angled shots, they need not fear boredom: the actors captivate the attention sufficiently enough that it is no bother.


In the end, the most tragic plot of the film makes me question how Blanche would have fared, had she been admitted into modern treatment for mental illness; that is the pain of the tragedy. While the film is primarily concerned with mental illness in the 1950s, it is altogether powerful in conveying a thought-provoking narrative of several underlying issues – namely, women in and out of marriage – all in a budding pocket of mixed culture in America. It is virtually relevant to any generation and people, which makes it a classic. It is a shame to see that current films have digressed from their origins in theatre, as was the case at the time Streetcar was made. To see it, however, is charming nonetheless, and I am grateful for the experience of watching this momentous film. 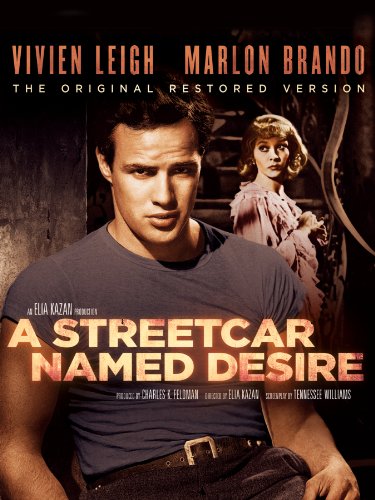 I wrote this challenging myself to be more creative, while also wanting to be relevant to the plot, in expressing my opinions. I also felt that this was quite a powerful film; by the end of it, I felt quite hollow having been so immersed in the lives of the characters, and that made me want to look at the film more critically to see why it made me feel that way. Make no mistake, this is a tragedy, and a real one, and it still is today. Hopefully, we have progressed in some ways in how we address the conditions of people that are sensitive, like Blanche, than we did in the 1950s.