Their first EP, The Three Words to Remember in Dealing with the End, was just the beginning.

All Time Low has been dedicated to creating lively and exciting music since 2003, despite their teenager commitments. The band started in Baltimore, Maryland when singer/guitarist Alex Gaskarth and guitarist Jack Baract decided to recruit drummer Rian Dawson and bassist Zack Merrick, who’s known for doing his infamous kick flips. Shortly after a year of performing locally, they signed to Emerald Moon Records, where they created their four song EP including songs like “Hit the Lights” and “Memories That Fade Like Photographs.” Another year later, they released their first full album The Party Scene, including thirteen new songs for fans to memorize.

Touring nationally, they ran along with other low-key bands such as Plain White T’s and Motion City Soundtrack until they bumped into a band under the Hopeless Records label. When All Time Low caught the producers’ attentions, they were given the opportunity to record with Hopeless Records. Valentine’s Day 2006, the contract was signed and All Time Low was on its’ way to becoming a world famous band.

The second album, and my personal favorite, was released to the public July 3, 2007. The band’s popularity skyrocketed with the release of their new album. So Right, It’s Wrong sold 14,200 copies in the first week. With several debuts on MTV and Jimmy Kimmel Live! and an appearance at 2007’s Warped Tour, Alex and Jack’s simple garage band became a national hit. AP Magazine announced All Time Low the Band of the Year 2008 and they graced the cover of Alternative Press Magazine in January.

They signed to Fall Out Boy’s Believers Never Die Part Deux Tour, along with Hey Monday, Metro Station, and Cobra Starship for spring and summer of 2009. I recently purchased my ticket and plan on seeing them in April.

Each of their songs produce a feeling of excitement that you can’t deny. Whether it’s excitement for the future, past memories, or just wants to make you get up and sing along, it’s there with the lively vocals of Alex Gaskarth. The drums produce a youthful, upbeat rhythm as the guitarists leave you dying for more. A particular song that includes the sensational combination of the band’s talents at its’ best would be “Six Feet Under The Stars,” the first single to their album So Right, It’s Wrong. The song tells a story of a boy who likes a girl and how he’s trying to impress her throughout the night but only ends up embarrassing himself. However, it’s not your typically “love song,” because in the end, it leaves you on a wondering whether the boy gets the girl or not.
All Time Low has a trend of leaving their fans questioning the fate of their song’s characters.

In another song off their third album, “Remembering Sunday,” the same (or a different?) boy has strong feelings for a girl who doesn’t seem to return them. “I’m calling, I'm calling at night/I don't mean to be a bother/But have you seen this girl?/She's been running through my dreams/And it's driving me crazy, it seems/I'm going to ask her to marry me.” He returns to her house once more, only to be told by the neighbors that she moved away and he claims how it’s “funny how it rained all day.” However, in the end, the girl’s voice, covered by Juliet Simms, vocalist of Automatic Loveletter, claims she’s “so many thousands of feet off the ground … towering over your head.” Not just a favorite of All Time Low, but one of my overall favorite songs, the song leaves a big question mark over my head. And that’s what I like about it. There are different ways to interpret it, whether “a thousand feet” be reference to Heaven or a plane. Coming off from their sophomore album, there’s bound to be a lot more from this band.

The second single released from their album, “Dear Maria, Count Me In,” is a worldwide known song that reached #86 on Pop 100, a playlist calculating the most air-played songs from a combination of mainstream radio stations, singles sales, and digital downloads.

Other hits include “The Beach,” “Shameless,” “Vegas,” and “Stay Awake (Dreams Only Last For One Night).”

If you’re typically into music that appear in AP Magazine or music with great and somewhat loud rhythms that most people can relate to, chances are you’re going to like All Time Low if you don’t already. I would have to give this band a ten out of ten for the combination of their skills, talent, and relatable lyrics. If anything, “The Beach” reminds me of great summer memories and I can’t wait to see them perform it live! Hope to see you there! 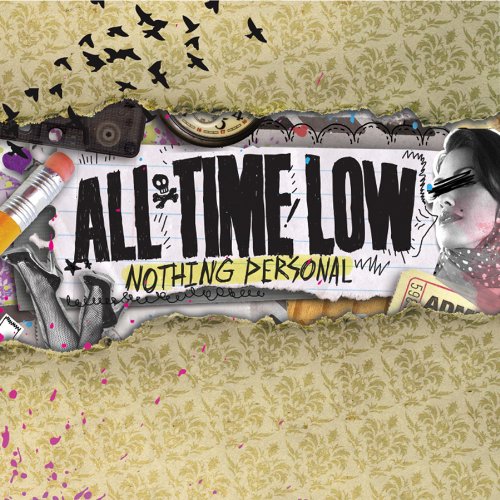