I you wan't to play as a sentient, gun-wielding dinosaur-and I know you do, then Nanosaur would have been the game for you. A fun, super challenging, exciting and intense game. It was first released in 1998, and judging by the platform it's on, you won't be able to play it anymore (sorry, a tear just came to my eye).

Plot: The game takes place in the year 4122, approximately two-thousand years into the future. Humans have mastered cloning technology and have used it to bring the dinosaurs back from extinction. However, humans went extinct following a plague (revealed in the Nanosaur web-comic to have been caused by the ancient germs the Nanosaurs carried) so the Nanosaurs formed their own civilization. However it's only a matter of time before they go extinct for the second time, so they send one of their own kind back 65 million years to find the eggs of five different dinosaurs in order to save your kind (though it is never explained how the eggs will save them). There are only 20 minutes to find all different types of eggs, and there are lots of Dinosaurs that will attack you, but you have a devastating arsenal of weapons that will make you more than a match for most of them.

Gameplay: The game is basically a third person shooter. You attack and get attacked. You have five different weapons to chose from. Powerups can be found to boost your ammunition (the max amount of any weapon is nine-hundered-nintey-nine shots). In volcanic areas, there are gas jets to fuel your jetpack, which is used to fly over things like lava and canyons full of-well i don't want to give too much away. The map is huge, there were even places I never saw twice. You wouldn't be able to explore the entire game area anyway, you only have twenty minutes to complete the game before a giant meteor hits and the extinction of the dinosaurs occurs. The Four dinosaur species (and one Pterosaur species) you encounter in the game are:

Tyrannosaurus, they to jump and stomp on you, it is really good at looking and sounding scary.

Stegosaurus: they were actually already extinct by that time, but it makes for some good playing. they hurt you by trampling you.

Pteranodon: these are the pterosaurs in the game, they dive bomb and drop rock on you.

Dilophosaurus: They were also exticnt by this time, but just like the stegos, they make for some good playing. they have frills and spit acid (which despite what they teach in JP, isn't true)

Triceratops: they ram you with their horns and are really fast, they'll also hide in bushes and make scary noises.

Personal reception and sequels: For me this is the most influential game of all time. I hope to turn it into a movie one day. As for the sequel, Nanosaur II: Hatchling, just like most it was not as good as the original, I may write a review for that some day. There was also another version of the first game called Nanosaur: Extreme! Which was described as the following: "what Nanosaur was meant to be - a total kill-fest" 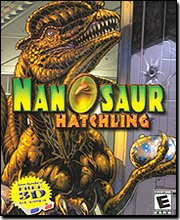 View profile
You could probably find videos of it on YouTube and websites like that. Also, pangeasoft.net, the company's website is full of information, screenshots, and all their other games like the Nanosaur sequel, called Hatchling, which is still supported on the current mac system.
julian GOLD said...
on Jul. 9 2010 at 12:54 pm
julian GOLD, Eugene, Oregon
17 articles 17 photos 223 comments

View profile
Sweet!! Dang, I wish I could play it. It sounds super cool! Nice job on the review, I think it's excellent!