“Well,” sighed Jess Watson, “I’m not sure what you think but, I’m pretty sure this one suffered the same fate as Mr.37009, strange the only difference is that of the skull for where she fell it doesn’t look like she hit her head.” Jess tied her long ginger hair back then pulled on some rubber gloves and started searching the body manually for evidence like hairs, fingerprints and gunshot residues. There were none so far as she could tell, wanting to complete her first task thoroughly, she asked her partners opinion. “What do you think?” She asked her associate Brian Carr.
“Can’t be too sure, without any official evidence to prove anything.” He replied revealing no emotion, Jess was amazed how could you not show emotion when at your feet is the carcass of a maimed, shot and pregnant woman? “We need some evidence to show to the F.I.M.D. I’ll get Cat out.” Decided Brian. Putting his hand into a bag, Cat needed to be activated and recently her power ran out quickly, so today Jess had decided to keep her deactivated, but take her along just in case. Cat was a Crime Advanced Technology robot, with a rather unimaginative name. She slowly revolved around the body twice sweeping a beaming red light over all the body. “I can’t detect any gunshot residues; however there are two hand prints on the clothes which suggest that perhaps she was dragged here by her killer.” Cat concluded, doing a final sweep of the body.
“Thanks, Cat! I’ll get the pathologists in and then they can take her to the funeral parlour.” Jess pulled of her gloves stuffed them in a rubber bag and into a pocket of her rather large winter coat. “C’mon Brian we’ll go back to my place and do some tests on those prints, you have them logged don’t you?” she added turning to face Cat. 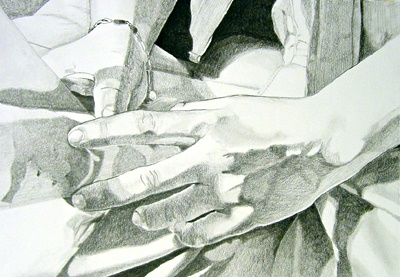