Of Men and Wolves (preview)

Favorite Quote:
"Keep acting the way you are. That way when I die for you, I die alone"


The class was wild and noisy when the teacher walked in. “Alright class, quiet down now. Ah there we go.” He said as the classroom slowly became quiet, with only the occasional shush. “We are starting a new section in history today…oh quiet down!” the elderly man yelled as the class booed. “We are going to learn of the revolutions and wars of the twenty-first century…quiet!” he yelled as the class protested his lecture.
“Oh why are you upset? This period in time is one that brought us to where we are now.” He continued. “Now in this lesson,” he said as he pulled up the white screen covering the chalkboard, “you will learn about historical figures such as the White Rabbit, or Da Le Sierra. You will also learn about World war III and revolutions, like the Cloud Chaser revolution and the Newveran Revolution.”
“Ok we will start in the year two-thousand. It is the end of the twentieth century, and the United States of America, for the first time, was attacked on its own territory. The world trade center’s, in New York City, had just been attacked and utterly destroyed. President George W. Bush went to war with a group known as Al Qaeda. In two-thousand eleven the war was ended by President Barrack Obama. Another group, known as the Taliban, had almost taken control of Afghanistan, but their activity died down for nearly a decade.”
“America, along with most of the world, had economic and political turmoil. This caused chaos in some parts of the world, and eventually, revolution.”


Chapter One: Dawn in January

Alexis Da la Sierra, sat watching the government ruin her world. She watched as they passed a bill that completely eliminated all Americans rights and freedoms. She crushed the coke can she held in her hand. “That’s it…that’s the last straw,” she whispered to herself. She stood up and walked to a wall with an unknown door. She moved a picture and flipped a switch, the wall opened up and revealed a staircase, she walked down the stairs and turned right to a heavily armored door, then grabbed a key, hanging around her neck, and placed it in the lock. Inside the room were three rows of shelves, each holding military equipment and weapons.
Alexis loaded the trunk of her car with as many weapons as she could, but decided that because of where she was going she didn’t need many, and added as much ammunition as possible. She was going to a gun-collecting rally. Since there was no longer the right to bear arms, the government held rallies in every major city. These rallies collected the guns and other items that citizens no longer had the right to own. This was where she made her first stand.
While driving to the collection rally in Asheville, she decided she could use some help. She called a man named Richard, a patriotic man, who would give his life for Alexis.
“Hey Alexis” He said when he answered the phone.
“Richard, met me at the rally, bring your gun”
“Whoa! Wait, What?”
“I’m doing it. I’m gonna start this war.”
“Well…can’t let you go in alone…wait for me”

The two had talked about doing this before, but Richard never believed it would actually happen. He shrugged and realized he needed to fight in order to restore his country. He walked into his bedroom and grabbed the M-16 assault rifle out of the gun safe in the back of his closet. He strapped it across his shoulder, grabbed his twelve times zoom scope, some extra ammunition, got in his go and drove the collection rally.

“Ma’am I will ask you one time to put down the gun and step away from the chair!” Yelled the overseer, after which Alexis fired another shot. A guard raised his gun to fire at her, but before he got off his shot, he had a bullet through his head. In a building far above the guards, Richard grinned at his impressive shot.

Another guard raised his gun to fire at her, when someone from inside the throng of people fired at him. People all around Alexis started loading their guns, with a few exceptions. Alexis smiled and realized she had won. She had her army. “My name is Alexis Da La Sierra! I am now your leader! Let’s take this city! To city hall!” she shouted. A shout came up from the crowd and her new founded army started marching towards the center of the city. 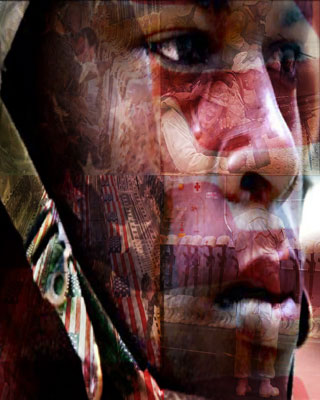 The author's comments:
Most Characters are based off of real people. this is only a preview
Post a comment
Submit your own