It was 1963. A warm and slightly humid Monday morning, 8:13 a.m. The zoo had yet to be filled; group tours started at nine so only a few people strolled about, enjoying the sun. Robert Short, a man of average size in a blue-grey suit, white Oxford shirt and awful patterned tie, was one of them. He toted a fresh newspaper and sipped his coffee as he wandered through the exhibits. He passed the chimps strutting about; the lazing hippos, their nostrils just above the water; the reptile room with its hanging, languid tenants; and the elephants, casually stripping the bark from their trees with long, sharp tusks. As he strolled by each he imagined them asking how he was, and him responding, starting a brief exchange.

Robert kept walking, past the camels, flamingos, water buffalo and antelope, toward the other entrance of the zoo, slowly making his way to work. He reached the big cat section where lions, tigers, and a severe absence of bears made their home. The lions perched on their manmade cliff-and-boulder set-up; spotted ocelots and leopards peered at him from behind foliage; and at last he spied the tigers. He hiked to work every day from his lonely, roach-infested apartment through these exhibits and always stopped to marvel at the Bengal that sat among his own private, barred-in creepers and bromeliads. The striped beast won admiration from Robert, the way he could just fade into his synthetic jungle.

Robert glanced at his watch; work started in 28 minutes. He had time to sit and watch. There was a small green bench, the paint peeling and giving off a chemical odor and he plopped down on it in a rather ungentlemanly fashion. The tiger sat at the front of his cage gazing at the people scurrying about around him. He sniffed the air and was greeted by the pleasant smell of fresh meat; the lions were being fed. His mouth watered a bit and he ran a sandpaper tongue over his teeth, dislodging a piece of bone from the day before. He mouthed the misshapen bit before swallowing it.

Robert watched the tiger breathe and move every so often, but nothing terribly exciting was happening. A poem began to form in his head, Blake’s “The Tyger.” He remembered it from college; he’d had to do an opinionated translation. He hadn’t done very well, he wasn’t good with poetry, but this one began to recite itself:

In the forests of the night.

What immortal hand or eye

Could frame thy fearful symmetry?

Tyger, Robert wondered, do you ever wonder who made you? Or why? Do you ever get lonely? He imagined a conversation over tea - meat pies for Satchel, he thought, chuckling. He wondered if Satchel liked his name, or if he had another his mother had given him.

He stopped and read the plaque near the cage. Satchel had been born right in the zoo, it said. He never got to know his real home, Robert thought sadly. He continued with this pretend tete-a-tete, closing his eyes to immerse himself in the fantasy.

What if I just went feral one day? Just escaped to, I don’t know, Borneo? India? Madagascar? Anywhere but here. He laughed out loud, breaking back into reality. The tiger looked up, flicking his golden eyes to him. He sniffed the air. This wasn’t his Keeper, it was someone else. He trailed back off into his half-sleep and closed his eyes.

Robert finally decided. He closed his eyes too, mirroring the tiger before him. I’m going feral. Or stupid. Both, neither, yes. He continued his conversation with Satchel in his head, and stood. Maybe he didn’t realize it, or maybe he did, but he reached into the bars to touch the beast on the head, between the eyes, as a mark of gratitude. Sadly for him, the tiger’s nose was much more powerful than his and it caught a whiff of the ham-and-cheese bagel Robert had consumed earlier. Opening its eyes and mouth simultaneously, thinking it was 9:30, it closed its gaping maw on the man’s outstretched hand, biting down and relishing the crunch of bone and rush of blood. Ignoring the screams and thrashing form in front of him, he chewed slowly.

An hour later, the Keeper arrived at 9:47 - late - to feed Satchel his breakfast. Something gold glinted in the water near the bars. He stooped and reached into the pool, looking at the watch quizzically.

Robert Short lived, of course, and was rushed to the hospital. There, he met a Colombian explorer and ended up moving to South America with her, ending his days happy, mosquito-bitten, and permanently left-handed. . 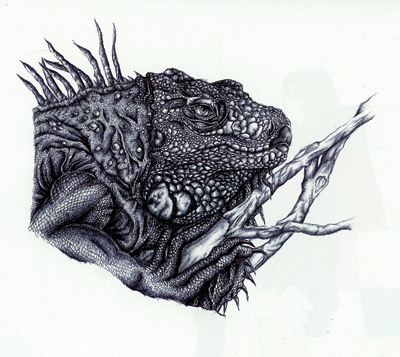 Favorite Quote:
Life is what we make it, always has been, always will be. ~Grandma Moses
A heartbreak is a blessing from god. It’s just a way of letting you realize he saved you from the wrong one. ~ Unknown

View profile
It's very funny for I know this poem we'll because I had to sing a song with the exact same lyrics. I really wasn't expecting for the ending to be quite like that. I actually enjoyed it a great deal. Keep writing!!!