A Goat Ate Me | Teen Ink

A Goat Ate Me

Favorite Quote:
"Isn't it funny how you broke my heart, but I still love you with all the pieces?"
"It's easy to stand in a crowd, but it takes courage to stand alone"
"What would you attempt if you knew you could never fail?"

I cautiously opened my canvas tent because I had awoken to the disturbance of rustling animals outside. I had heard something that sounded like dead leaves being walked on, which was normal, but I also heard a strange scratching noise. I thought that maybe it had been a woodpecker or some squirrels. Poking my head out of the tent, I found myself face to face with a very large goat. Now, when I say large, I mean a LARGE goat. Perhaps, it was even as tall as my two-person tent. However, that didn’t stop what it had done next. At first, the goat just stood there, looking at me, but then, out of nowhere, it took a chunk out of the tent door. I sat there on the inside of my tent staring out of the half-eaten door in disbelief. So then, when he swallowed the door, he moved on to the northern side and continued feasting. Don’t ask me why I didn’t try stopping this ginormous goat, because I couldn’t tell you, even though that was my favorite tent. I just sat there, calmly, pondering on how he hasn’t choked yet. When the goat finished all four sides of the tent, what he did next amazed me: that darn goat ate me, too. To my dismay, it didn’t even hurt. When I was making my way down his throat, I was gazing at the remnants of my tent. I hit the stomach floor and just kind of sat there. His stomach was very lumpy and squishy. This was definitely not my idea of hiking the Appalachian Mountains. Anyways, I was still in one whole piece, and I felt perfectly fine. I told you that the goat was big. Then, I got a mysterious thought: did I put out my campfire? It worried me that a forest fire might start, and the goat might try to eat that, too. But hey, on the bright side, I got my favorite tent back. 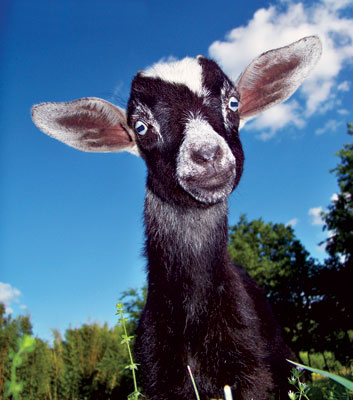