The True Story of Goldilocks and the Three Bears | Teen Ink

The True Story of Goldilocks and the Three Bears

Goldilocks woke up in her small, cramped room to the sounds of screaming and broken glass.
A lovely start to a brand new day, Goldilocks thought to herself as her bare feet touched the cold, hard floor. She walked two feet in front of her (as that was about the extent of her room’s width) and looked at herself in the mirror.
Goldilocks was small for her age - only 4’ 5”- yet she had the amount of spunk, enthusiasm and exuberance that a “normal-sized” 10-year-old would be expected to have. Her long, wavy hair was light ash blonde in the cheap artificial lighting of her room, but in the sunlight it shone like golden glitter (which she only knew because she had once snuck out a broken shard of glass to see herself in the light of the sun). The freckles that dotted the tops of her rosy cheeks and the tips of her button-shaped nose made her look like an adorable, innocent young girl yet she actually possessed a lot of bravado and sass. Her eyes were pale blue - almost gray - and her skin was exceptionally fair.
She sighed as another loud crash could be heard from the room downstairs in her small cottage. She looked to her right at the minuscule broom closet to figure out what she was going to wear and decided on a long-sleeved maroon shirt with thin white pants and brown leather sandals. She brushed her long, knotted hair as much as she could, put on her special beaded leather necklace and made her way downstairs to see what chaos awaited her today.

Months later, Goldilocks could be seen running around the forest with Baby Bear, playing with him, swimming with him in the stream and eating with the family outside in the evenings, when the air was chilly and you could look up in a clearing in the trees and see the stars as they twinkled in the black night.
Goldilocks loved to go fishing with the family, Mama Bear enjoyed making tiny clothing - or tiny compared to what she was used to anyway - for Goldilocks, Papa Bear loved to make wooden toys for both his son and Goldilocks and Baby Bear loved the fact that he had an actual friend to play and laugh with.
Goldilocks’s parents were never to be heard from again and for the first time in Goldilocks’s life, she was finally happy.
That’s the true ending of the story of Goldilocks and the Three Bears.
Everyone lived happily ever after... 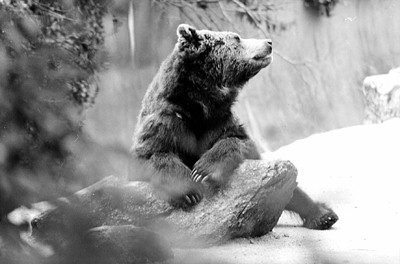 I saw a prompt online to make an alternative story to a classic fairytale and got inspired to write this.

Favorite Quote:
"if i could give her a big does of 'be nice' then we'd all live happily ever after." -Stevie Rae, Chosen.

Favorite Quote:
“A grownup is a child with layers on.”
-Woody Harrelson