I awaken to the crackling bonfire with roarous laughter and cheering located in the center of camp. Based on the sun’s position, it seemed to be nearly 6 in the morning, and it stretched it’s rays through the spaces between the trees’ foliage. Placing my hands on my rough deerskin, I pushed myself upward, and slipped my two moccasins onto my feet. Looking at myself in the mirror, I saw Peeking past my tent, I spotted a deer skinned above the fire on a spit. My father, Chayton made eye contact with me and waved me over, I looked back in my tent to my mother and walked beside the fire. Since the siding of our tribe the Seneca, with the british, most of us were morbid and solemn, but some people attempted to play it off with drinks and games. The war from the invaders of our land and their controllers, tore apart the iroquois league, and we never felt more put against each other. At least, I never felt so against everyone. We were like nomads because of these awful people. Stating that we must follow God’s word and leave, and that Manifest Destiny was soon to come. Since the British enforced the Royal Proclamation of 1763, we expect them to continue that path of separation between us and their settlers here after the war. The fact is, in my head I knew that they were no better then the people shooing us away.

“Dakota, tend to this spit, I have to tan its hide.” My father reached for a knife in his belt and walked toward the hanging deer skin. I yawned as I reached for the iron rod and twisted it, blowing my hair out of my face. Several men sat along the campfire speaking to each other comedically, grinning ear to ear. Even though it didn’t seem like we were in much danger due to the massive army and navy the British owned, I still feared for my family’s well being. When my father returns he tosses me a rod, and we head to the lake nearby. We simultaneously cast and I squat then throw my feet over the bank. We’ve been going to this hole since I was 6, and 8 years later, it tended to calm me still.

“I know you’re afraid Dakota” My father scratched the back of his neck. I looked at him out of the corner of my eye.

“Just know that Red Jacket is doing what’s best for the tribe, even if that means the league is split” I draw a fist a put the blunt end to my mouth. I find it easiest to suppress my thoughts, because I know my input doesn’t even matter at this point, were already dedicated to this war.

“I understand father, I only wish the brutality of Blacksnake was reduced, it makes me fear what retaliation the Americans will bring.”

Chayton ran a hand through his hand, “He knows what he’s do-”

“None of them know what they’re doing! Red Jacket is letting the Americans just split up the only protection and leverage we had, what leader he is!” My face is bright as a plum tomato. “Ontario has been the only place I ever lived and we’re gonna change that just because these Europeans are simply telling us to?”

Sprinting from the woods behind us, Hania, our best scout, looked distraught.

My father grabbed me by the wrist and rushed back to the camp. Before reaching our home, I saw murmurs of ember above the treeline. An expression of dismemberment filled my face. I heard horrific screams drowned by the crackling of fire, my brain reassociating the comforting sound I earlier heard in the morning, to a one of dread.

Holding up his arm blocking the foliage my father broke into the opening of our camp. Frantically twisting his head, he spotted our tent, aflame.

He stared at me for 3 solid seconds, “Stay here, do not move.” As he ran to the home of my mother and baby sister, I tried to comprehend what was happening.  I stared at the burning shed used to store food, where we labored to fill for the cold winters, I looked at the crying children, which I had tended to and cared for, I looked at the people running away, happy for their survival but melancholy for the desertion and destruction of our home. Where would we go? What would we do? I almost fell on my knees, before my father shook me and wiped the tears rolling down my cheeks. I hadn’t even notice before knocked out of my shocked state. He drew his forehead to mine and kept it there, which surprisingly alleviated me. My sister, Mika was bawling, and my mother, Tallulah, turned her face to face her chest. Mika was in a woven basket a blanket wrapped around her. My father ran behind a building, the stables. He led a horse out to the exit of the camp, Got on and help the rest of us on. As I hoisted myself up using my father's arm and strong grip, a noise emits. BANG! As his body slouched, his left leg slid to the right and his whole body in return. My father fell off of the horse, lifeless. Hysterical with emotion, my mouth was half open and my tears were like the falls my father took me to bathe. I move in front of my mother on the horse and whipped it to rush it out, I took a last glance at a place I’ve spent 14 years of my life. The buildings collapse and torches thrown to increase the fire. I saw Americans marching along the woods, spreading fire from tree to tree. I grew enraged as my teeth seethed.  This had to be John Sullivan. I wanted to do something, but I was left hopeless, along with my tribe and my father. I almost felt ashamed of the Americans. This wasn’t a battle, this was a massacre. 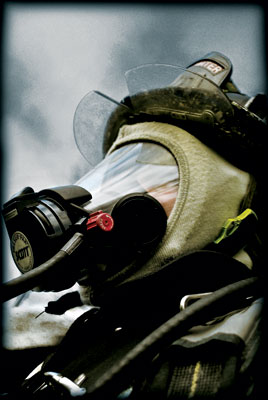