She called her lady’s maid into the room to help her prepare for the day. After squeezing into a corset, and then being buttoned into a dress of fine, blood red muslin, Arianna waited for her maid to arrange her golden curls. Sophie, the lady’s maid, carefully took one curl at a time, and curled it to a more perfect, seductive state. Then she pinned each curl atop her head in an elaborate, fairy-tale, but very fashionable, hairstyle. A few curls bounced loose and molded themselves around the plump circle of Arianna’s face, but it looked becoming, so she decided to leave them rather than re-pin them.


Arianna gazed at herself in the looking glass while Sophie took powder and rouge and painted Arianna’s face. Naturally, she was beautiful, but she always went to the extremes to turn her beauty into an ethereal experience.


“No, Sophie, I do not. Thank you,” Arianna was perfectly nice and pleasant to all of her servants, or as she liked to call them, ‘helpers.’


“Yes, ma’am,” Sophie back away a few inches from Arianna and clasped her hands together at her waist. “Will that be all ma’am?”


“Yes, Sophie. Thank you. You are dismissed,” Sophie quickly exited the room in silence, after giving a curt head nod in the direction of Arianna.


Before exiting her bedchamber, Arianna took one last look at herself in the full length looking glass, and smiled at her reflection in approval. In two weeks, she would turn 30, and, as of now, she was alone. Of course, Arianna was tired of her life as a spinster, and just longed to find a man who would be willing to offer his hand in marriage.


She ran her hand over the front of her dress, and spun on her heel. While walking downstairs to go on a walk by herself in the park, she was on a mission. Today, she would capture the eyes of a handsome man, and he would soon become hers. If all were to go well, by the time Arianna hit 30 years of age, she would no longer be growing into the life of an old maid.


The butler opened the door for her as she reached the front of the house, and she nodded and thanked him. She knew in her heart, she would not be coming home disappointed tonight. 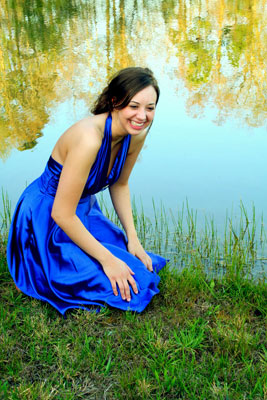 The author's comments:
I was going to make this more of a story (longer, more details) but I liked it better as a short and to the point type of thing. But I dont know.
Please check out my other work? Thanks :)
Post a comment
Submit your own