“Tomorrow’s the special day I’ve been waiting. All the hard work will finally pay off, my parents will be proud,” said Lana while walking anxiously around her childhood room.
“But have you made a decision yet?” asked her best friend, Sofia.
“No, not yet. But I know I will make the right choice.”
See, Lana is an 18-year-old teenage girl whose whole life has been dedicated to school and extracurricular activities to enrichen her résumé. She had always been at the top of her class and had also won many competitions in her school. Her dream had always been to become a surgeon and she knew that to make that dream come true, she had to work really hard. Tomorrow was the day that she had been waiting for a long time. The newspapers with Lana’s picture on it were all over the small town of Greece. Everyone was talking about how the smart girl would be holding the Greek flag at the parade on the Greek Independence Day. Most people would consider it an incredible opportunity and would do it without thinking twice about it. However, Lana was worried about what people would think. An Albanian girl holding the Greek flag during the parade, is something a lot of parents at the school wouldn’t like. This is because Lana and her family lived in a small city with a very judging mentality because of the history of Greece and Albania.
“You look great in that picture,” said her mom while brushing Lana’s long, golden, silky hair.
Lana went back to the day when that picture was taken. Her mom had put her hair in a slick ponytail and some makeup to cover her dark under-eyes from all the studying for exam week. Lana sees her big smile on the picture and goes on to read the comments made on the paper. The positive and supportive comments make her feel a little better and take away a small piece of the sadness and negativity caused from the negative comments.
Even though some of the parents in the Parent Council of the school were in disagreement that a foreign student should be the one to hold the flag, the principal decided differently, and it was now up to Lana to make a choice. Her parents also didn’t want to interfere, so the choice was all hers to make.
“What do you think Lana, are you ready to give an answer to the school council?” asked her dad as gently as possible because he didn’t want her to feel pressured.
“I think it’s best I let someone else, a Greek student, hold the flag. I wouldn’t want to be disrespectful to the other parents and I want to respect other people’s wishes. I will have other opportunities to show off my hard work.”
It was very obvious that the negative comments had gotten into Lana’s head or otherwise she wouldn’t have taken this decision. Either way, her parents didn’t want to force her into making a decision they thought was right, so they just supported her wish.
Right after they ended this discussion, the bell rang. Lana went to open the door and was surprised to see that a group of her classmates were there.
“Hey guys, what are you doing here? It's very late.”
“We came to see you! We missed you in class today,” said Petro, the friend who always sits next to Lana in biology class.
“Yeah, and we were waiting for you to start the dance rehearsals,” said some of her girlfriends.
“Sorry guys, I wanted to spend some alone time today. I also decided to let someone else hold the flag tomorrow,” Lana answered through her teeth in a very low tone.
“Look, Lana,” said Sofia while handing Lana a box with the Greek flag inside of it, whether you do it or not, we all think you deserve to be the one holding the flag tomorrow so you should keep this in case you change your mind.”
Lana's sadness started to go away. As she watched her friends disappear into the roads behind the dark night, she realized that she had people who supported and valued her. Holding into that thought of happiness, Lana went to bed. She laid down, while staring at the ceiling, in silence. After a few moments, the silence was interrupted by her mother, calling her to come to the dining room.
“This just came for you. It’s from LMU Munich (one of the best medical universities in Europe). Do you want to open it?”
“No, you do it for me, I'm way too nervous to read it,” said Lana while biting her fingernails as her whole body was shaking.
After a few seconds of silence, Lana couldn’t help but ask “So? Did I get in?”
“You got in!!!!” answered her mum while going in to hug Lana.
“I did it mom. I'm going to become a surgeon; I can't believe it! No one can take this from me.”
The next day as she was sitting in class alone and staring at the window, she heard footsteps and then the sweet and comforting voice she knew all too well. It was Mr. Smith, her favorite professor, who taught biology.
“Hey Lana, what are you staring at.”
“Oh, nothing in particular,” answered Lana, even though she realized that she had been staring far away at the parade this whole time. And there it was, the Greek and Albanian flag, Lana’s flags, standing next to each other. And at that moment, Lana couldn’t have felt prouder of her nationality. 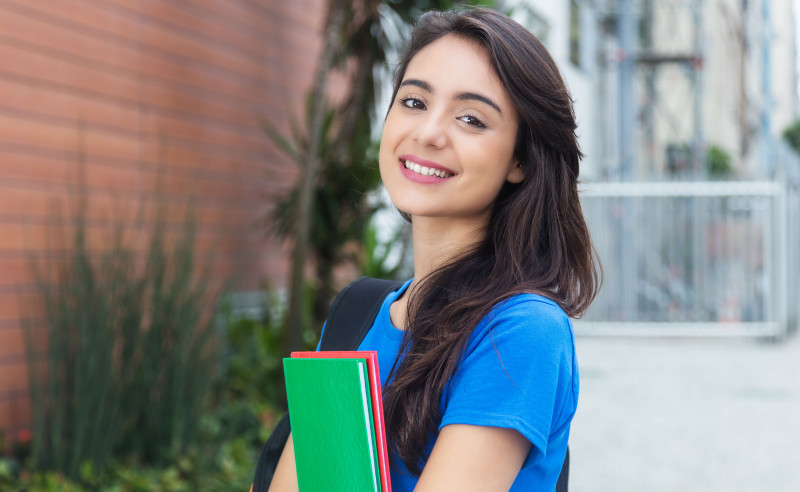