I want to be just like you | Teen Ink

Favorite Quote:
"be who you are and are who you be"~tab

The little eyes follow him like a hawk. He pulls out a glass and a sippy cup and fills the glass with full with orange juice and about to fill the sippy cup with it when the little follower says, " daddy i want a big glass like you." he says ," ok buddy" with a smile on his face.

He flicked throught the stations on the radio and finally settled on a song called,"dont stop believing", by journey. He made his steering wheel a drum. As the little eyes watched him he began to sing along . He came to a red light and stopped for a minute when he heard from the little brown eyed brunette in the back singing along too. Nice job buddy he said as he turned around for a quick flash :).

The little boy follows his daddy up the stairs  to get ready for bed. He opens up his draws and pulls  out his scooby-doo pjs. He slids them on then goes to find his daddy in the bathroom brushing his teeth. Seeing that he hops right up leaning on the sink and reaches for his tooth brush and tooth paste. He then starts to scrub and scrub and every time daddy spit he spit.

Off to bed it is for you buddy he says. But daddy im not tires he says with a little yawn. He then picks him up throws him over his sholder and carries him to his bed while tickle torturing him.

But daddy im really not... Sleeeepppyy.. He said with another yawn. Ok buddy well i will tell you a story. He lays down next to him on the bed and starts to tell him a story. With in the first 2 minutes the little eyes are  are softly shut and far away in a land full of imagination.

Daddy calls the same little boy, as the light swich flicks on. Yea buddy as he sturs from his sleep. I had a bad dream. Come here bud you can sleep with me . He hops up and says daddy i want to be just like you when i grow up , and nuzzles up next to him. He smiles and says goodnight buddy i love you. 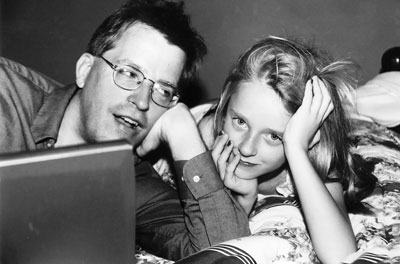 The author's comments:
This is how i want my little boy or girl to be when i get married
Post a comment
Submit your own