The word echoed in my ears after I shouted it.

My father gave me a look of despair as he nodded. He had just broken the news to me that my mare had broken her leg this morning. That spells death for a racehorse like Storm.

I raced out of the house into the pouring rain. Salty tears ran down my face as I sprinted to the stable.

The veterinarian was still there, and he gave me a look of condolence. He shook his head as I came – drenched and panting- into the stable.

“She'll never walk again, much less run. We'll need to put her down” He told me in a slow sad voice. I barely recognized him as Dr. James, who had brought Storm into the world a few short years before.

I knew he was lying.

I knew that as soon as I entered Storm's stall, she would stand up and greet me.

I knew that she was really okay.

But all this time, I knew that I was wrong.

I pushed past Dr. James into Storm's stall...

And braced myself for the worst.

The beautiful creature was lying on her side. With the whites of her eyes showing, she lifted her head. She nickered to me, and with all of the fear in her world in her eyes, she searched mine for reassurance.


“Hey girl” My voice was raw from sobbing, but it still managed to calm her down. I sat in the hay next to her, and she laid her head in my lap. Her breathing regulated as I stroked her forehead. Her eyes closed, and I was brought back to the first time I had seen my beautiful girl.

It was a cold day in March, at some ungodly hour in the morning.
I had been writing an English essay, and had zonked out at my desk. Dad came in my room and tapped me on the shoulder.

“Huh? Wha? 79!” I shook myself awake from a nightmare involving long division.

“Zippo had her foal” Dad was beaming as if he had birthed the creature himself.

Within five minutes, I was adorning my robe and slippers, and trudging through the slush with my father. The slosh slosh of my feet in the half melted snow made me wince. Dirty frozen water seeped in between my toes, and I violently shivered.

Only a few more steps, I thought to myself. Until I meet a beautiful funny little foal.

Now, I would walk a mile in that same sludge to see my little Storm well again.

Dr. James had been standing just outside the stable door, smoking a cigarette. I watched from a distance as ashes fell onto the snow, boring a hole in it's white flaky surface. As we came closer, the distinct scent of tobacco smoke made me cough. The smell made it's way to my throat, and I had to swallow several times to dissipate it. Dad gave Dr. James a stern look for smoking so close to a newborn, but James shook him off.

A glorious wave of heat hit me as I entered the stable. I graciously removed my robe, before following Dad to Zippo's stall.

“She's a little one” Dad told me, opening the large stall door.

“She?” I inquired, before meeting eyes with the most beautiful thing in the world.

My awkward little foal was standing for the first time. She was shivering slightly, but her eyes were full of joy. Those large brown eyes that I love so much. The eyes that solve all of my problems.

The eyes that I would do anything for.

“Well hi there!” I whispered to the foal, crouching on the fresh bedding in front of her. The tiny filly cocked her head to the side, as if she didn't understand.

Giggling at her human like behavior, I slowly held out my hand for her to smell.

She leaned forward, to sniff my hand, stretching her neck too far. Her small disproportionate body fell forward, but my hand caught her little nose, keeping her balanced.

“I'll never let you fall” I whispered to the hurt mare now. Gently pushing her head from my lap, I stormed out of her stall, to face Dr. James and my father.

“You're not putting her down” I interrupted their conversation about the proper dosage it would take to euthanize my baby.

“Lizzy, look...” My father started, but I cut him off before he got the chance to speak.

“She's a fighter. You know that. She's going to race again” My eyes were raw from the fresh tears they were producing. “I promised to never let her fall,” I swallowed and took a deep breath. “I have to keep my promise.”

“Storm's had her-” Dad yelled into the house, but I didn't hear his full announcement. I was already sprinting the distance between our house and Storm's stall.

Dr. James was inside her stall. He was towel-drying...

The second most beautiful creature in the world.

“Well hi there!” I whispered to Storm's large arrival. The little colt sneezed, and his eyes met mine. That instant connection returned. Everything seemed so new through his chestnut eyes. Being more curious than he was when Storm was a colt, he walked – or rather tripped – towards me.

I stroked his forehead, as he stumbled into my arms.

“I gotcha buddy” I whispered to the colt, staring at his beautiful, healed mother.

And I spoke the words that saved her one year ago. 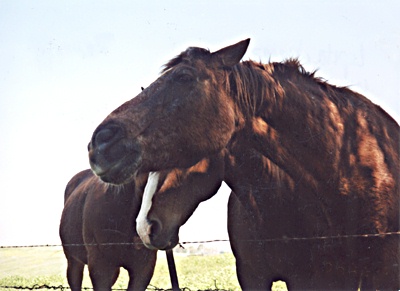 bookmouse BRONZE said...
on Aug. 14 2013 at 9:44 am
bookmouse BRONZE, Chapel Hill, North Carolina
1 article 90 photos 251 comments
View profile
I love it! It's so hard to find a good horse story that doesn't completely have the standard "get's horse, loses horse, gets horse back" plot. I found myself saying you shouldn't smoke near a barn because the hay can easily catch fire when Dr. James was smoking! :)
Koala08 said...
on Feb. 16 2012 at 3:57 pm
Koala08, Toronto, Other
0 articles 2 photos 6 comments

Favorite Quote:
Life is not about waiting for the storm to pass...it's about learning to dance in the rain. :)

Favorite Quote:
"Give every man thy ear, but few thy voice." - W. Shakespeare.
"Our greatest glory is not in never falling, but in getting up every time we do." - Confucius

Favorite Quote:
If you are thrown, face your fears and get back in the saddle no matter what!- My personal experiences.

View profile
If you are reading this, please rate or comment. Thanks so much!!! :D
SeizeTheDay SILVER said...
on Jan. 4 2012 at 8:27 pm
SeizeTheDay SILVER, Cleveland Heights, Ohio
7 articles 0 photos 60 comments

View profile
Thanks so much! I'm so sorry to hear about Penny.. I've lost so many horses that I have ridden - though mostly from old age, or from changing owners. I'm looking forward to reading your work! :D
Barrel_racer_luvr_4ever said...
on Jan. 1 2012 at 7:37 pm
Barrel_racer_luvr_4ever, Mexia, Texas
0 articles 8 photos 28 comments

Favorite Quote:
If you are thrown, face your fears and get back in the saddle no matter what!- My personal experiences.

View profile
This is a wonderful piece of writing.... When I first read the part about the broken leg I nearly burst in tears because we had to put down my first horse "Penny" because she had broken her leg so badly(But she was as far from a pure Thoroughbred racehorse as can be, She was a Peruvian Paso). But I fortunate enough for God to Bless me with her daughter.. Her name is Fallon and is featured in one of my works that is still pending named "Well Howdy There!"