The car wasn’t going that fast, but just fast enough to knock Avery down, hard. My breath caught in my throat as I watched Avery walking across that faded cross walk and that silvery car come around the curve. The collided in the middle and I watched in shock as Avery’s small frame hit the ground. She didn’t move and I ran across the street, despite what had just occurred I still didn’t look both ways, and knelt down beside her. I could see the place where head had hit the pavement and the mess of dark hair and blood. I held her face in my hands and I noticed her eyelids flickered slightly.
“Avery! Avery wake up!” I called, the woman who had been driving the car and gotten out and was talking to a 911 operator.
Avery’s eyes fluttered open and they stared up as if they were seeing things for the first time. Her eyes found my face and she zeroed in on my eyes.
“Luke, what happened?” Her eye brows furrowed worriedly and I shifted so I lean over her more, and block the sun from her blue eyes.
“A car ran into you, your going to be ok, though.” I kept my hands on the sides of her small face and she gave me a small smile.
“My head hurts,” she sighed and she shut her eyes for a moment.
“Avery, keep your eyes open.”
“No. I’m tired.” She squinted at me and the sounds of sirens sounded in the distance. She shut her eyes again.
“Avery. Open your eyes.”
She didn’t say anything, just kept her eyes shut. For a moment she looked so peaceful, resting there under my hands and the afternoon sunlight illuminating her pale face.
“Avery!” Panic struck up in me. What if something was seriously wrong with her, not just a concussion. “Avery!”
“Is she ok?” The woman hurried over and leaved over me and Avery. She was a middle-aged woman and she wrung her hands nervously.
I stared down at the peaceful Avery and leaned down and kissed her softly on her still lips. She had to live.
The ambulance pulled up now and I felt my self pushed back away from her. She paramedics set to work loading her up on a gurney.
“Can I ride with you?” I asked, as they lifted the gurney up into the ambulance.
“Only immediate family.” The man shut the doors and walked around the ambulance. I stood next to the woman, who was breathing heavily now and watched the ambulance drive away. 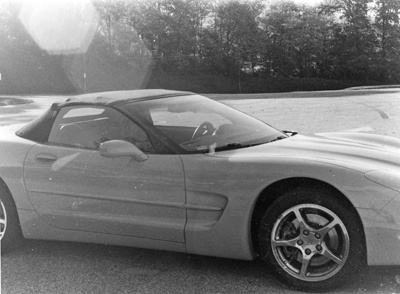 View profile
I think this is an excellent story!  It's very emotional, no grammar errors and you have the perfect balance between description and dialogue.  Keep writing! :)
PadmeAmidala GOLD said...
on Oct. 22 2011 at 12:45 pm
PadmeAmidala GOLD, Ramona, California
17 articles 0 photos 18 comments

View profile
Well, I wasn't even originally going to publish it or anything, I just wrote it because it was how I was feeling. I see how you view it that way but I'm not trying to take credit for the plot, only my wording of it.
PadmeAmidala GOLD said...
on Oct. 22 2011 at 12:45 pm
PadmeAmidala GOLD, Ramona, California
17 articles 0 photos 18 comments

View profile
Well, I wasn't even originally going to publish it or anything, I just wrote it because it was how I was feeling. I see how you view it that way but I'm not trying to take credit for the plot, only my wording of it.
Odessa_Sterling00 DIAMOND said...
on Oct. 22 2011 at 8:55 am
Odessa_Sterling00 DIAMOND, No, Missouri
87 articles 108 photos 966 comments

View profile
If you want to feel sccomplished by making people cry because something is soooo sad, trying coming up with your own story and adding emotion there.  I just think it's like plausrism and taking credit for someone elses work.
PadmeAmidala GOLD said...
on Oct. 22 2011 at 1:30 am
PadmeAmidala GOLD, Ramona, California
17 articles 0 photos 18 comments

Well, I tried to explain and be polite but since you want to be rude about it, I can't stop you. Though I really don't understand why you're so offended. I mean, yes my mom did cry during the movie, but that's seeing it on a screen, with the music and special effects that make it real. I want to see if I could evoke the same emotions with just words. You wouldn't very likely cry form reading the screenplay or script would you? I wanted to see if I could put it in story form, without the music, without the effects that make it seem real, and still get that kind of emotional response. Which I did.

Anyway, you can read something else I wrote if you really think I'm that bad of a writer, and maybe it might change your mind.

View profile
I still don't get why you feel so accomplished about writing someone elses story.  You didn't make your mom cry, george lucus did.  It's his story, his ideas and you just copied them down.  I think it was a dumb idea. You shouldn't have posted it.
PadmeAmidala GOLD said...
on Oct. 21 2011 at 4:55 pm
PadmeAmidala GOLD, Ramona, California
17 articles 0 photos 18 comments

Hey, this is a good story. :) there are some spelling and grammar errors, but other than that, fantastic!

I hate to go about it like this, but since I cannot respond to your comment on my writing about Anakin and Padme, I shall post here. As a fellow believer, I feel you may be more inclined to listen to what I have to say:

It is a narrative of the plot. Written in an emotional way to evoke feelings in the reader. Of course it was mostly aimed towards people who have seen the movie so that they could see it playing out in front of them as they read it. The movie  was very heart-wrenching for me and I felt the need to write it all out, in a way so that people wouldn't know right off the bat what it was about. I hoped it would either fall into place as they read or come as a shock at the end.

And my mom HAS seen the movie. That's why she was crying. She understood it. I was feeling very emotional about it because we had watched it again recently; so yes, I wrote it out in a way so that (hopefully) people who hadn't seen it would would be intruiged and people who had would see it written in my words, hopefully in a very emotional way so as to get a response similar to what I was feeling. When I feel like that about something, I want to share it and want people to feel exactly what I do.

I do not claim that the story is mine, only that the writing is. It is George Lucas's story in my words.