Somewhere close to three or four in the morning, a police cruiser passed by. We were quick to run out of sight. Becka and I were hiding behind the same dumpster when he stepped out of the car.
For what felt like the longest time, he stood there. Speechless. Right at his feet, in giant letters, was the word “Peace.” As he stared in shock and awe at our small town masterpiece, we slipped away with satisfied smiles plastered to our glowing faces. Behind us, I could just hear the buzz of a radio as he said, “Bill, you’ve gotta’ come see this.”
To this day, I still have the newspaper clipping from when we made the front page. And better yet, we still haven’t been caught! 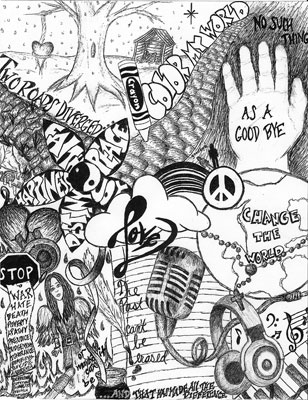 Favorite Quote:
You lied, and I cried. You're a jerk, so I was hurt. You're a
deceiver, But I was a believer. Sorry I wasted your time, I guess?