She’s never been this cold before.

She twists in her sheets, one hand making its way between the air particles. Her breath comes in a screaming whisper and words she’s never known trail along the tip of her tongue. The deep red of the muscle flexing beneath her ribs seeps in the edges of her vision, pushing away her thoughts as they transform into words.

She’s never been this alive before.

Months have dragged along, seeming so tedious and endless in the present tense, until they evaporate into the rest of yesterday. When her long-term memory compacts them, she can’t remember what she wore or said or how many things she ruined.

She only remembers how, after a while, all the food she wasn’t eating didn’t tempt her anymore. Her convex mirror distorts her hollow insides and blends the shadows under her ribcage.

The boy she wants with the murky eyes and the sharp jawline doesn’t utter a word, not counting the occasional, “Are you sick?” or “God, eat something.”

Before, they had had nights that lasted until sunrise over telephone wires. And she thought that he knew.

She’s never been this obstinate before.

It’s a commonly known fact that she’ll never reach perfection before the hospital doors, a fact that means nothing. Like the fact that smoking offers potential health risks such as lung cancer, that birth control has the risk of heart attack or stroke, that gum contains two calories that could be the deciding factor between a size 0 and a size 00.

It’s a fact that denies processing.

The foundation in her head will break soon, though, and she’ll fall through in a whispering scream until her arms are wound through with needles and wires, pumping artificial life into her.

She’s a lithium battery, ready to be recharged when all the energy is used up, until the socket in the wall sparks into white light, and the boy’s murky eyes become clear. 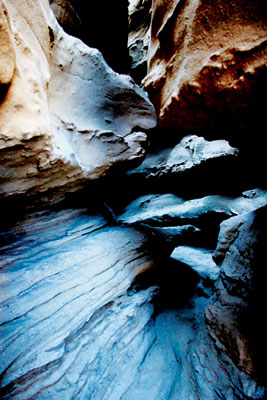 Favorite Quote:
"I am who I am, sorry, no changes."

the words are flawless!
Hay_Wire PLATINUM said...
on Jul. 25 2009 at 6:38 am
Hay_Wire PLATINUM, Independence, Missouri
42 articles 0 photos 219 comments
View profile
that was amazing. i find myself drawn towards stories of this..thing. i guess they call it a disease. i..have kinda danced on the edge of it for some time. it makes me wonder how many other girls just arent sick enough to be noticed thanky ou for reminding me where i could end up.