Favorite Quote:
“Life is not measured by the number of breaths we take, but by the moments that take our breath away." - Maya Angelou

My grandfather never did like the winter. I guess that’s because he felt farthest away from home then. The tired streets of our forgotten neighborhood always seemed to look different that time of year and more often than not it was a refreshing change. Grandfather never seemed to think so. He’d watch the unwelcome layer of white atop the world from his window with a look of disdain. His heavy grey eyes conveyed a strange sort of sadness I could never quite comprehend. While this was only another season for me, it was a reminder of times past and further restrictions for a certain elderly fellow. This information would come to my knowledge years later but at the age of eight it was a conundrum.

I remember having a terrible cold one night. Most of that day was spent in my bed memorizing the shape of each cloud that passed by to check on me. They never stayed very long but I appreciated their appearance despite its brevity. Sometime after sunset my family members went out for a special dinner. I didn’t inquire as to where they were headed. Such matters lose importance when one’s nose refuses to function as it should. If there was one thing I hated about having a cold, it was the congestion.

Later that night I was awoken in the kindest fashion possible. If there is a gentler technique to drag a mind from a peaceful state of unconsciousness, I have not witnessed it. When my eyes adjusted to my surroundings, my grandfather was still holding the damp cloth to my burning forehead. His eyes were glowing with mischief. “Get dressed little one,” he whispered.

As a child I had a tendency to ask too many questions but something about his tone and the overall vibe of that night told me to enjoy the mystery. That was exactly what I did.

Upon dressing in what I deemed to be appropriate attire for any scenario my second grade mind could conceive, I made my way downstairs. The steps creaked offensively under my weight as I went down them as fast as I could, eager to see what the night had in store for me. Grandfather was waiting at the bottom of the staircase with my jacket in his wrinkled hands. He once told me there was a story behind each wrinkle, a moment in time ingrained in one’s skin. Grandfather also said they were a cheap alternative to tattoos, though you had very little say in their design. This may be a strange thing to admit but I have always envied those creases in his flesh. I thought of them as a sort of recognition for managing to live long enough. Also they were endearing, smile lines doubly so.

After bundling me up in a snowsuit and tying a scarf around my neck several times, grandfather handed me a warm thermos. He seemed to understand my look of disgust almost immediately. “Don’t worry it’s not broth,” he chuckled.

For the past couple of days my mother had been shoveling scalding broth, whose contents were questionable, down my throat. It was safe to say I had developed a genuine fear of that specific food. Much to my delight, it was chocolate goodness that wafted towards my nostrils as I inhaled the substance in that thermos. Hot chocolate. Contrary to popular belief, it is actually grandfather who knows best.

The gust of wind invaded every corner of our house when he opened the door. “Off we go.” His tone resembled that of a person who was off to an exciting adventure. This thought both delighted and perplexed me. Grandfather was known to dislike this season and rarely ventured out of our cozy home during these chilly months, so why was he in such a rush to head into the icy grips of a winter night? Refusing to spoil the mood, I did not ask.

We took our first steps on the icy sidewalk in silence. It was a nice silence, the kind where one finds comfort in another person’s rhythmic breathing. The steady cycle of inhalations and exhalations got us all the way to the next neighborhood. I still remember the stars that night. They danced in the dark sky while bragging of their celestial beauty, occasionally they winked at us.

Grandfather shoved his hands deeper in the pockets of his coat. The man always refused to wear gloves; he said that though he despised the chilly bite of Canadian winters, to put on gloves was to touch the sun. Poor guy, he was quite sensitive when it came to temperature.

Sometime during our walk, two weathered palms covered my eyes. Oh, how I loved surprises. “What is it?” I squealed. I could feel his rumbling laughter as he told me to be patient. When sight was finally returned to me I saw a misshapen snowman not far from where I stood. “I thought this would cheer you up,” he smiled. Suffice it to say, this crudely built creature was one of the most beautiful things I had ever seen. I imagined this elderly man limping out some hours earlier, bearing the cold and constructing this gift.

He watched in silence as I used a stick to create a face for my new friend. “Mahadsanid,” I said to my grandfather though I knew he did not like to be thanked. We began to make our way home when we crossed paths with another man. He bore similar tattoos to my grandfather and they seemed to acknowledge each other with nods and knowing smiles. It’s funny, the comfort we can take in the shared experiences of our generation.

Grandfather passed away that summer. I understood then that were two souls simply crossing paths at the intersection of time. Though it was a poignant period in my life I always took comfort in that night of congestion and manufactured friends. It was a night of firsts and chocolate goodness. It was our night. 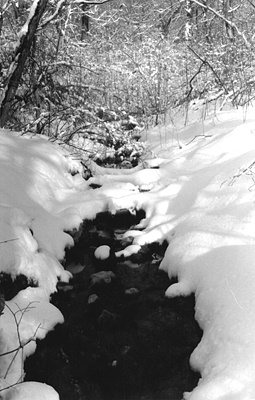