<i>I art Elizabeth Tanner
And I seek my Prince Charming to sew the binding stitch of my royal banner
Oh do not mistake me for a childish fool
I know lip stick stained frogs and bitter witches will never duel
But I do seek my happily ever after
The one that spawns endless laughter
The one that I have witnessed with my very own deep blue eyes
In the First Lady’s, my mother’s, in my best friend’s ‘I love you’ sighs
In their endless chatter of how they have found the one,
And now it is my turn to choose who I shall call hun,
Who are you hun?
Are you boy number one?
Jake, the son of Sue?
Or Matt, who for these purposes shall be called boy number two?</i>

“Elizabeth…Elizabeth.” My shoulders jostle back and forth as Jake shakes me, temporarily snuffing out my worries. Only to reignite them, with flames higher than ever. “Well, who’s it gonna be?” he demands.

“I… uh…I dunno.” My intestines blacken from the heat. I could not turn crisp now. Not when I was faced with the decision that might determine my fate, my success as a human being.

“Honey, I don’t wanna put any pressure on you. But, do ya think you could let me know by the morning?”

Sh**. Matt had just said the same thing. There is no escaping this one.

Following the crowd out of the door, away from the hallways where the constant chatter of students and shutting of lockers make it impossible to think, I depart for the privacy of my room.
<i>And now the question lies in my thoughtful hands
Hands that rise up and down as I try to comprehend
Football quarterback or track star
Ones got brains but the other has a car
He’s a brun and the other’s a blond
Oh how can I choose when both appear so worthy of my fond?
But of course! Do the books not always say?
That a blonde football quarterback always scores the ‘A’!
Pulling out Pocahontas and flipping on Surbugatory I double check my facts
All the while chugging water to try to extinguish the fire and relax
Rays of sunshine timidly peek through me to replace the flames as my personal heaters
As I collapse on my bed I tell myself that life could not be any sweeter.</i>


Warm arms wrap around me excitedly. “I promise to be the best boyfriend ever!” Matt exclaims.

The warmth of his arms encloses me again. But this time it is only one arm, which wraps around the back of my neck while his hand rests on my shoulder. The characters chat lovingly to each other on the movie screen in front of us. However, as the minutes pass, the characters begin to fade from my vision, replaced by memories of what has just been, and still is, an amazing first date.
<i>His gaze makes me smile
His words make me laugh
His features make me want him
When it’s bright and when it’s dim
I envision his arm around me, wrinkled with age
I envision writing how I have found the one, on every single diary page
Only ashes remain of my previous fire
My certainty of having made the right decision could not be any higher
Or so it seems…
I have a flashback about a crush article from a teen magazine
Am I temporarily blinded from his imperfections?
That as time passes will come out in intolerable successions
To not succumb to the same trap into which my inferior predecessors fell
I scrape off my blinds in order to search for any bothersome flaws I could foretell
His forehead has a scar
He constantly talks about cars
Some of his jokes make me cringe
A little fat protrudes from his belly from an overnight binge
Oh no, how could this be!
Perhaps some of these flaws fit into some other girl’s visions, but he is not for me!
I CHOSE THE WRONG GUY!
A spark comes loose and inflames the sky</i>

“Please Jake, I made a huge mistake.” I was on the verge of tears. How could I have done this! I might have thrown my chance of finding my soul mate out the window when I chose Matt. Jake has to forgive me! He just has to!

“Well, I guess so… But only because you’re so cute.”

And now Jake’s arms encircle me. Meanwhile, Matt uses his to wipe off his tear stained eyes in some far off bathroom.
<i>And so begins my first date with my new mush
This time, I will not allow myself to be blinded by any so called “crush”
His twinkling eyes match mine of ocean blue
But why do they have an unflattering brown hue?
His talk of animals is so engaging
But his drooling talk about computers has been a solid ten minutes I’m waging
HE IS JUST AS FLAWED AS MATT!
The fire hurts worse than an iron bat</i>

<i>Arms encircle me, but they are just my own
Plopped down on my bedroom floor, forever alone
Flipping through my parents’ wedding pictures, watching movies, and reading books
I cannot bear to look at their blissful looks
My mother’s shouts faintly echo through the house
But listening closer, I surprise to hear that they are directed at her spouse?
Even more surprising is that the couple on television follows suit
Tearing apart novels and magazines I discover one often gives the other the boot
But yet at the end of every show
At the end of every day
My mother and these characters sit at the dinner table with smiles on their faces
They still speak lovingly of how they have found the one
And that’s when I realize. It isn’t Matt that’s gotta problem. Jake doesn’t have a problem either. Well both do, but that’s not what I’m getting at. What I’m getting at is that I’ve gotta problem. I am way too picky. And that is my only regret.</i> 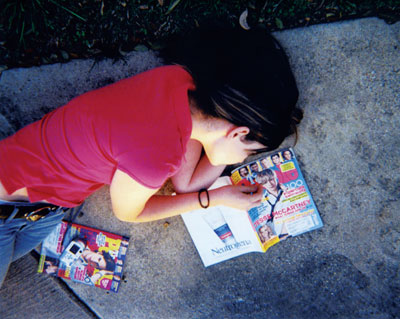 The author's comments:
I wrote this story with the theme of coming of age in mind.
Post a comment
Submit your own

View profile
I had a hard time seeing where exactly you were going with this in the beginning....this was written in a very abstract manner around a big subject (true love). I feel like you could have expanded on this more, but it's also quite good as it is in this form. Quite unique actually. But very abstract. Sorry, I get confused with abstract sometimes....otherwise, good. Not that great unfortunatly. But still. 5/5. KEEP WRITING! :D