Knock-knock.
Damn. He couldn’t be here already. I looked nervously at the calendar attached to the refrigerator, then to the digital clock on the oven. The officer was right on-time.
He came casually, rapping on the door, holding up that goddamn pink slip to the window. He was clothed in the typical Oklahoma deputy uniform, held together with that golden badge of what was supposed to be honor. But that badge wasn’t worth anything if he was going to do what he was going to do.
My children hid in the back room, anticipating something big. They always knew when things were wrong, even if you didn’t tell them. They just sensed it. It was part of their childish nature. It was as if something in the air told them that their lives were going to change forever.
My wife was touring our property for what probably was the last time. Her arms were folded and she bore an emotionless look on her face. She hadn’t shed a tear ever since we read the first notice. But this wasn’t an attempt to be optimistic. It was surrender. A capitulation to all the hardships we faced. In her mind, we lost. She accepted it. And she simply didn’t care anymore.
The house was nothing special; a wooden two-story home with small parcel of land in the back where we farmed. Most of the exterior was faded sepia; when we first bought it, it was a radiant white, but slowly the paint chipped away like our financial condition.

Everything was leading up to this. We struggled ever since we set foot in this house. We scrounged for every last penny. We toiled until we could barely stand. We begged God for help until our knees throbbed in pain. And we wished that we could find our way out of the cave, and finally see the light at the end of the tunnel. We waited for the day where we could stop plodding through life. But no amount of hard work, prayer, or hope could stop the inevitable. And, sure enough, the inevitable came.
At that time, we thought we could be perfectly happy as farmers. We believed we could still make ends meet, and that we would be able to provide for our family of four. We were idiots.
I had two children, a seven year old son and a five year old daughter. My wife and I always found faith for the future in our children, mostly because they had a future, a bright one, despite their bleak environment. Even though we lived old fashioned lives as farmers, they wanted to be scientists and artists. We weren’t mad; in fact, we were glad that they sought out a better life than the farm could give them. We were proud that they wanted to share their talents with the world. Frankly, they were our greatest contribution to society. It was way too late for us to chase our dreams; we lived for theirs.
My son had always been a curious soul. He was never afraid to ask questions, and he seemed to learn something new each day. Before our TV let out, he would watch shows like Fetch! And Sid the Science Kid all the time. He didn’t learn much at the local school, so we always tried to bring him to the library as much as possible. At supper time, he would tell the family everything he learned that day. Eventually, he began telling us about things we had never heard of before. He was already thinking about his future occupation: he wanted to be a chemist, doctor, astronaut, zoologist, and scientist. Now, he decided on becoming a full-time paleontologist, which was, according to him, “by far the coolest job.”
My daughter was a little different, more artistic than scientific. She spent a lot of her time doodling, like many kids do, but she had true talent, especially for her age. I remember the day she won first place in her school’s art contest. Granted, the competition included only kindergarten and first grade, but it was still a major accomplishment. As soon as she came home, she presented her first place ribbon to us with glee. “Mommy! Daddy! Look at what I won!” We were so proud that day; we framed her award and we decided to take her to an art museum for her fifth birthday. We raided the little money we had in our bank account to take the trip, but the gift we gave our daughter that day was priceless. As soon as we took a step out of the museum, she made it clear to us that she definitely wanted to be an artist.

One of the things our children did have in common was their love of exploring. They spent their time frolicking outside and basking in the glory of the universe. They watched with awe at how a few tiny seeds could blossom into a vibrant display of nature. They were enamored by the unending azure sea above them, and the way the clouds slowly sailed across it. They found only wonder and goodness in their surroundings. All of the simple things that most people take for granted are the things they see the most beauty in. To me, this practice meant more than two kids gawking over commonplace things; it magnified their innocence.

I remember the day when I robbed them of their innocence. It was the day we got our first notice. The kids had prepared their letter to Santa Claus that day, almost nine months early. Eagerly, they showed it to me. My son wanted a field dinosaur guide, and my daughter wanted a canvass as well as some paints. But importantly, the letter said, they wished for money to help their mom and dad.

I was shocked. No one told them anything about our financial straits. But they just knew. 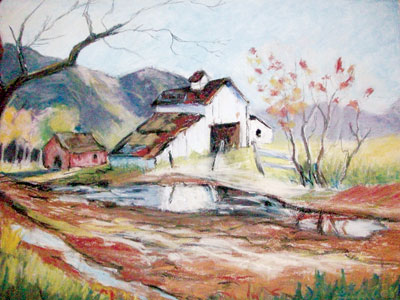 revolution567 BRONZE said...
on Mar. 5 2014 at 8:48 pm
revolution567 BRONZE, Norwood, Massachusetts
1 article 0 photos 5 comments
View profile
Thank you for such an indepth comment. I've been working on this story for a while now, so I put a lot of thought into the story and the plot. It seems as if all that work paid off!
Kestrel135 PLATINUM said...
on Mar. 4 2014 at 7:38 pm
Kestrel135 PLATINUM, Waterford, Connecticut
43 articles 0 photos 256 comments

View profile
This was a beautfully written article, and the plot line was perfect. You managed to get a whole life down on paper in only a few paragraphs, and I have to say, this is one of the best articles I have read so far. The beginning was great, hinting at the "inevitable doom" that his family faced, but then abandoning that line of thought and going into the family themselves. And while the father is hovering in remembrance of his life, I found myself thinking that he will find a way to resolve this peacefully. You felt their despair, and clung to the hope that the whole thing will blow over with him and the family better people. Then the shoebox entered the scene. Again. And again - until finally, you knew exactly what he would do, but didn't truly expect him to do it. I have read articles like this, where the 'happy moral ending' is abandoned and the 'other way it could have gone' is taken in and harbored. The difference is that this one truly led me to believe that he wouldn't do it; it was so evokingly written that the whole time he was thinking about his children, you didn't think he was capable of something as criminal as he did in the end. Alas, the reader is fooled once more. I truly have to congratulate you on this. It was very well written, had strong vocabulary, and a great plot that was brilliantly deceitful. Well done!