I always loved that feeling when you hit the ice. When you’re walking single-file out from the dressing room, especially when you’re the visiting team. I liked to compare it to the D-Day invasion. When the brave troops were standing in the boats, tightly packed together like sardines. Scared s*******, but ready to fight. Then thee gates open and they feel their stomachs drop as they jump in to enemy territory. The boo’s rained down on us like the machine gun fire rained down on them. Of course it must have been a little more horrific on Normandy. I just compare hockey to war all the time. Don’t ask me why, every player has something. Like our captain Geoff O’Reilly, b****** always chews an entire pack of gum before every game. 6 pieces at a time. Or one of our defencemen, Sam Tucker. If it’s game day, from the minute he wakes up ‘till he has to put his bucket on he listens to Bob Seger. Then, there’s Sergei. Our Russian goaltender reads f****** Science text books before games. Russians are crazy, goalies are crazy, put em together……My God.

I did my regular two slow laps around our end of the ice and then dropped to my knees to stretch at centre ice. The rest of the guys shot pucks on the goaltender, but you don’t do a hell of a lot of shooting when you’re a fighter. You get around five of the sixty minutes of game time and that’s shortened if you get thrown out or hurt. Ohhhhhhhhhhhhh that feels good!  I loved my pre-game stretches. Not only did they stretch my aching muscles, but they helped me to relax. Every time I exhaled the more ready I was for the task ahead. Unfortunately, that task skated up beside me and dropped to his knees.

“Hey Dickson, want an aspirin? In case you still have that headache.” Oliver Gervais. Six foot three, two hundred twenty pounds, damn near my stats except I was about an inch and a half taller. The headache he was referring to was a couple months before, when he had been kind enough to throw an elbow at my head when I was carrying the puck in to his zone.

“Careful Ollie,” I replied, leaning forward to stretch my lower back, “I heard you’re getting called up to the Flyers soon. I’d hate to have to hurt you before your……What is it? You’re sixth big break?”

“That’s funny Jimmy, but I’m fine playing in the minor leagues for now. On a 10 game winning streak and get to kick your a** every couple weeks.” Gervais sneered. F*** I hated him.

“And you were dressed for how many of those two games?” I smiled and looked at him.

“F*** you Dicky,” he spat, “keep your head up tonight.” I couldn’t help but laugh as he got up and skated away. It’s a great feeling when you out-chirp someone.

Warm-up came to an end and both teams skated to our respective benches. The Canadian national anthem was sung first due to us (the Toronto Marlies) being the visiting team, then the American one for Gervais’ Adirondack Phantoms. They get everyone off the ice, the puck drops and here we go……………..with me on the bench. No complaints though, it was about the team’s victory and I knew my place.

The Phantoms opened the scoring about three minutes in on a powerplay goal. Once again it was our “future all-star” winger Tomas Cermak taking a stupid slashing penalty. What a waste, I would kill to have that kind of skill. Lazy kid. I got on the ice briefly and screened the goalie while we cycled the puck around the Phantoms’ end. The goalie Eric McLeod kept whacking me with his war club of a stick. My ankles took a beating and so did my lower back when his defenceman Tommy Lane decided to assist his ‘tender in trying to movie. Emphasis on trying.

Must have been my second and final shift of the first period when I was finally on the ice against Gervais. I didn’t get near him until Lane started carrying the puck up the boards with his head down. A painful mistake. I got a good run at him and drove him in to the boards with the force of a locomotive. I glanced at the ref to make sure I wasn’t getting a penalty and started skating up the ice. That’s when I felt the unmistakable sensation of being slashed in the back of the leg. I turned around to see Gervais staring me in the face. If looks could kill, I would have been six feet under. But I was in no mood for dying.

“Let’s go!” he shouted and dropped his gloves. I did the same and the referees blew the whistle so we could go at it. We circled each other for a moment or two, removing our elbow pads and rolling up our sleeves, we stared at each other, unblinking. We simultaneously put our hands up and the war was on.

I grabbed the collar of Gervais’ jersey and landed a quick right. He ducked out of the way a bit, but he definitely felt it. He grabbed my collar and leaned out of the way to avoid my long reach. The little rat popped in for a quick right, he missed, but was ramming his left hand that was on my collar in to my chin. It staggered me a bit and he connected with a right. It tagged me nicely, but I was able to swing my right hand up from underneath his arms and hit him on the jaw. He lost his balance and stepped forward to land another right and finish the fight, but alas, twas not to be.

I toe-picked the ice stepping forward and stumbled. Next thing I knew I dropped to my knees, when I caught myself looking up at the rafters I knew it was a right hand. I crumpled to the ice and the last thing I saw before I had a little nap was Gervais pumping up the crowd by waving his arms up and down. 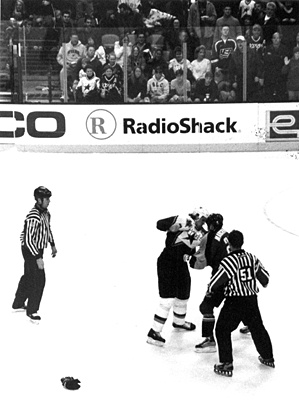 The author's comments:
A night in the life of sports' toughest position.
Post a comment
Submit your own