Mrs. Anjali Prekash sat clicking at her laptop as moonlight flooded in through the window. Of course, you wouldn’t notice the moonlight, because every light in the apartment was on. She was a plump woman of 49. Her carefully dyed black hair hung in a long braid down her back. Although she may have seemed old at first glance, her face revealed a sort of vigor that was rarely seen even in youths.

Brisk winds made the room almost chilly; every window was open. From where she was sitting, Mrs. Prekash could have smelled the aroma of donuts from the bakery on the street. But at the moment, as she sat stiffly at her desk, she didn’t notice the sweet scent. No, she was far too busy e-mailing her cousin about a juicy scandal.

Mr. Shekhar Prekash, a small man in his fifties, sat on the living room couch, which Mrs. Prekash had recently had redone in bright lavender upholstery. He was reading the newspaper. His hair was graying in patches, and the wrinkles at the corners of his eyes were visible behind his glasses. Mr. Prekash never opened his paper in the morning, not since his wife had, 22 years ago, seen a cockroach in the kitchen and announced that as long as she was up, every light in the house would be on. Always a light sleeper, Mr. Prekash gave up retiring early a long time ago.

The only other person in the room, Mr. Prekash’s brother, Kash, snored in the rocking chair, like he had every night since he moved in three months ago. The Prekashes’ son, Shev, would normally be watching late-night dramas, but he had recently gotten a job at the pizza parlor nearby.

“Shekhar,” Anjali called to her husband, “what was the name of that boy’s uncle – the one who refuses to come to the weddi-” She suddenly stopped, realizing the location of her husband’s feet. “Shekhar, how many times do I have to tell you, keep your feet off my clean coffee table. Every day I polish it and every night you ruin it. I remember that that banker from Calcutta once promised me that he would never ….’’

Shekhar merely grunted and put his feet down, as he always did as soon as she started on one of her lectures. If his wife had continued to speak about that Calcuttan, she would forget about her e-mail and lecture endlessly. He simply went back to reading the newspaper; apparently the police were searching for a robber nicknamed “the Bug,” and Miss Venezuela had won the title of Miss Universe. A second later, her lecturing and his reading were interrupted by a loud snore from Kash.

“You know what, Shekhar?” Anjali said, casting a weary eye at Kash. “We should call Raul and tell him he can’t stay here next week. One of your brothers living here is enough.”

“Hmm, while you’re at it, you can thank him for letting us stay at his house in New York last winter.”

Anjali sighed, and after a moment of consideration, sat back down. She was about to resume typing when something on the street caught her attention.

“Shekhar,” she hissed, peering out the window. “Shekhar, come here.”

Shekhar trudged over to the window and looked out onto the street. He could see nothing out of the ordinary. The crescent moon made small patches of light on the sidewalk and car tops. A large black cat was sitting on the steps of the building across the street, while several others loitered on the sidewalk. Music blared from speeding cars. No, there was nothing wrong with the picture as far as Shekhar could see. But then he noticed an unfamiliar convertible parked in front of their building.

Shekhar narrowed his eyes. His wife had never referred to a car as a she before. Maybe naming them would be next.

“I see it,” Shekhar admitted. “The neighbors probably have guests. It really isn’t anything to worr-”

“What?” Anjali said. “You foolish man. I’m talking about that Nandani girl across the street.”

At second glance, Shekhar saw that the cat was standing up on its hind legs. The cat was not a cat at all; it was someone wearing a large black hoodie.

“Hmm.” Shekhar yawned again, then smiled. “Perhaps we should call the Shahs. Maybe it’s that Bugman person breaking into their apartment.”

“Is it really?” There was something a little fake about Shekhar’s tone, but Anjali was too preoccupied to notice.

“Yes, she’s even wearing a sari under that jacket. And she’s carrying that bookbag of Shev’s we gave them. Remember – the one with the large bleach stain. Where on earth can she be going at this time? And in a sari, no less.”

Mrs. Prekash was uncharacteristically silent for a moment, chewing on her lower lip as she watched the furtive movements of the girl below.

“Maybe she’s got to work late or something,” said Shekhar, a little too casually.

“Don’t be so dim, Shekhar. She works at that Italian restaurant on Third Street. Why would she wear a sari there?” Silence for a moment. The girl stood still, shivering from the wind.

“Shekhar, she must be eloping! That’s why she took that bag instead of a fancy one. Guilty conscience.” Anjali sounded unusually gleeful.

He went back to the couch and resumed reading the paper. Kash snored and muttered something about blue kangaroos. Anjali, though, remained propped on her elbows, staring out the window.

“She’s pacing up and down the road, most likely having second thoughts.”

“Why would she have second thoughts?” Shekhar said sarcastically.

“If you are going to elope, you do it or not. The moment of elopement is no time to have second thoughts. The children these days are as wishy-washy as the weather.”

“A sensible girl like her would think twice,” Shekhar reasoned. “Besides, if she wants to elope, it’s her own business. Why don’t you finish your e-mail to Jenna?”

Anjali clucked her tongue. “If she was sensible, she wouldn’t be eloping. And Jenna can wait.”

“You eloped,” Shekhar reminded her quietly.

Luckily for Shekhar, his wife didn’t hear. The noise from a raucous car engine had drowned out his voice.

“Oooh,” Anjali cried, “here’s the boy. He’s driving in some ugly red taxi. He’s turned so I can’t see his face. He’s wearing a red cap and a strange outfit. I can’t make it out. The taxi has pictures on it, but I cannot make them out either. It almost looks like – it couldn’t be that. Oh, imagine the look on Mrs. Shah’s face when she finds out her daughter ran off with an odd taxi driver in a red cap!”

“Mmm. It will all be very amusing.”

“She’s gotten into the car and they are about to drive off,” Anjali informed him.

The engine was heard once more. “They are going!” Anjali sighed with an air of satisfaction. “Oh, I’m going to have so much fun telling everybody about it. To think I got to see the entire thing. I wonder who the boy is.”

She laughed jubilantly. Shekhar remained silent, his face hidden behind the newspaper.

“I’m going to go get some hot cocoa,” she announced, “then I’ll write about everything to Jenna.”

A few seconds later, a piercing scream came from the kitchen.

“Shekhar!” Anjali shrieked, emerging from the kitchen clutching a piece of paper. “It was Shev! Shev was that odd taxi driver!” She began pacing. “It wasn’t a taxi. It was a delivery car. I knew those pictures were pizzas. He was even wearing his uniform!”

“Look!” she yelled, shaking the paper in her hands. “He left a note on the fridge. What are we going to do?”

She began angrily to beat Kash’s rocking chair. Poor Kash’s head banged the cushion every time she hit it. Then she stopped, her eyes widening. Kash, who had jerked almost awake, snored and went back to sleep. Anjali ran to the front door in such a frenzy that the floor shook. She grabbed the keys and quickly put on her slippers.

As she left she panted, “It’s not too late. They just left.”

There was a loud clamor on the stairs. Soon another engine roared and sped off. Shekhar, still sitting with his face behind the paper, slowly lifted his feet and put them on the coffee table. He picked up the phone and dialed.

“Shev? She’s coming after you. You’d better head for Canada.”

Shekhar hung up and went back to his neglected story about the Bug, a wide Cheshire cat grin on his face. 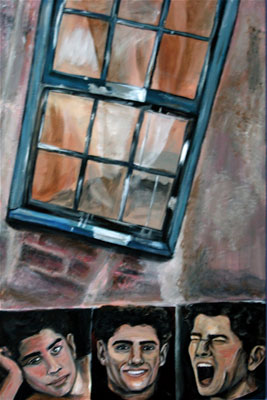 This article has 30 comments.

Very cool! I liked the characters!

Please check out some of my work when you get the chance!

Favorite Quote:
"We are not retreating, we are merely advancing in another direction." General George S. Pattton, US Army

Favorite Quote:
"Life is 10% what happens to you and 90% your reaction to it"

View profile
Dang! That's amazing! I love it! Wonderful charachter depth and description. Whoohoo!
LemonQuiche said...
on May. 12 2010 at 7:07 am
I liked the plot, and the twist was pretty funny, but I thought your sentences were too choppy and kind of confusing.
writergirl13 GOLD said...
on Apr. 22 2010 at 7:50 pm
writergirl13 GOLD, Cherry Hill, New Jersey
11 articles 8 photos 261 comments

Favorite Quote:
All are lunatics, but he who can analyze his delusions is called a philosopher.
Ambrose Bierce

View profile
Haha. that was perfect awesomeness. very relatable characters. hope she doesn't catch them.
whatIreallythink said...
on Feb. 27 2010 at 1:13 pm
I really like this, it made em laugh a little at the end when the faher was in on the whole thing :)
Mykindapeopledontcarewhatyouthink BRONZE said...
on Feb. 15 2010 at 5:23 pm
Mykindapeopledontcarewhatyouthink BRONZE, Gueydan, Louisiana
2 articles 0 photos 124 comments
View profile
that was realy entertaining
katnix BRONZE said...
on Feb. 15 2010 at 2:46 pm
katnix BRONZE, San Bernardino, California
1 article 0 photos 2 comments

Favorite Quote:
" i was aiming for the heart but i accidently hit america in the stomach" - upton sinclair

View profile
this is extremely funny and enteraining
Sarah J said...
on Jan. 3 2010 at 3:27 pm
Well...i was thinking that she went into the kitchen to make the hot cocoa and then passed by the fridge and saw the note.
Meerie said...
on Jan. 2 2010 at 11:05 pm
Really good! The dialogue is pretty fluid and the characters' personalities are vividly portrayed.

Favorite Quote:
My wish, for you, is that this life becomes all that you want it to.