This was really important to Tiffany. She knew it well.

She was standing on the green, holding her club tightly in her hand; her ball was three yards away from the hole. If only she could get the ball into the hole, the game would be hers. The 6 o’clock sunlight shined upon the golf course, bringing senses of coolness on the players. The wind was blowing gently, but still it couldn’t cool down her nervousness. The tension she felt, was a feeling she had never had before, like an ivy, creeping onto and chilling her back. She took a deep breath and crouched down to think about her strategy.

Tiffany was well known as the champion of all kinds of golf competitions. Regardless of how tough the match was, Tiffany was always the one who would hold the cup and smile in front of the cameras in the end. She was the brightest star in the sky, shadowing the others.

In her previous game, Tiffany would simply walk up to the ball, think of the strategy for a second and then hit it in without hesitation.

However, this time was different.

She looked around. Her caddy was standing behind her emotionlessly, and her opponents, who were all dressed similarly in red skirts and white T-shirts, were all looking at her with the same strange smile. Everyone was still and silent. She was a little scared, not only because of her desire to win, but also because of the strangeness of this place.

Her heart was pounding in her chest, blurring up her thoughts. Her whole body was trembling. She stood up straight, gazed at the hole for a while and walked up to the ball. She adjusted her position, took a deep breath and hit the ball.

The ball rolled up the hill, tilted slightly to the right and headed towards the hole. It continued to engage, slowed down as it approached the hole and… finally fell in! Tiffany was the champion again. The awful feelings were washed away by the waves of happiness and pride as she cheered.

However, the others didn’t move. They just stood there watching her with an emotionless smile. Tiffany walked to her caddy and asked,“What’s the matter with you? Don’t you feel happy for me? I am the champion!” The caddy didn’t respond. Tiffany wanted to shake him. But her hand passed right through the caddy’s shoulder. She gasped and backed up, astonished to discover her caddy turning blurred, losing his figure. She engaged a little bit, only to find him turning amorphous, with colors of his clothes and skin changing unreal and reforming into squares.

He became a set of pixels!

With heavy beats on her heart, she kneeled down, finding out everything in her world swirling up, becoming thousands of pixels. She looked at her hands, and they were turning gold and started melting into small pieces…

“Mom, this game is boring. I want another one,” the voice of a little boy echoed beyond her. Tiffany looked up, but she saw nothing but pixels. “The golf game was boring. You can win the championship all the time if you choose Tiffany.”

The reality of her life dawned on Tiffany. She could not believe that she had been a game character for years, and all she had ever done was following the programs that were written for her. Her destiny was to win every single match without failure. The pixels were everywhere, melting everything into a stream of gold and silver. Tiffany knew that she was also losing her figure, but she still managed to open her mouth; the words she said echoed around the sky…

“No! You don’t understand,” she shouted fiercely,“Golf is not something for you to sit on the couch,  hold controller and only watch me putt in thousands of balls and call it easy.”

“This is not easy at all.You don’t understand how much effort I put in each game. Your cruelty and ignorance hurts – without considering that I got emotions as you do! Forget your stinky sense of ignorance. I am also a kind of life on this planet, even if I am made of pixels. You can never treat me like that!”

“If Tiffany wins the game again, I am going to delete the game.” The voice from the boy continued, companied with the sound of his unstopping quaffing of Coke. Obviously, he was unable to hear anything from this “virtual” world.

The sound pierced through the cloud of pixels - like a thunder, trembling Tiffany’s world. Tiffany heard other voices. They were everywhere, engulfing her and wrapping around her, almost like silks, begging her to make this world live. Tiffany looked down and glanced at the streams of pixels around her; subconsciously, memories of her winning champions and challenging herself in every tournamentin this world pouring into her brain…

She had to lose the game to protect her beloved world, but how could she lose? Despite the effort she contributed to each game, she was programed to win every tournament.

A single teardrop made of silver pixels fell onto Tiffany’s blurry cheek. It quickly melted into her face, but the cold sensation remained for a long time.

The new game startedwith Tiffany and other game characters on the tee. The scenes were the same, the opponents were the same; only Tiffany was different. She stood on the tee and swung with all her strength. Instead of following the program that was written for her to hit a straight shot, the ball dodged straight left, forming a huge hook, and disappeared into the bushes. This was a mistake that she had never made before. And what was waiting for her, was an additional three strokes penalty…

Eventually, it was not Tiffany who held the gold medal when the game finished.

She had made a sacrifice to allow her beloved world to survive, and to let the other programs retain their rights to live. She felt a sense of delight when the flash lights from the cameras focused on her opponents and the chants of the winner’s name surrounded the course. The disappointment of losing the game still crept up inside, but again, it was worth it to Tiffany. She smiled and looked up at the sky. It was dusk now, and the golden sun slowly sank into the horizon. Streams of sunlight fell upon Tiffany’s face. She could feel the warmth all over her body, giving her comfort and thanking her for the sacrifice.

Tiffany knew it was the program that gave her the emotions, the chance to think and choose, and the determination to sacrifice.Tiffany also knew that she would be able to see the sunrise again. It would be tomorrow, precisely at 6 o’clock in the morning just as it always had been. 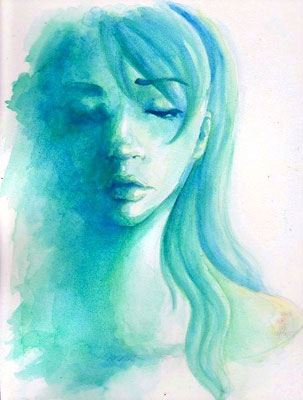 I have been playing golf for ten years. As a national first rate athlete, golf plays an important role in my life. During my studies in Stanford AI4ALL summer program, i find out my academic interest in AI. One day when I played the golf, I was standing on the grass, the wind was whispering. I heard my inner voice "why not write something about AI and golf". I hope more reader love this article.